Houdini and The Doctor are once again in action in a new audio drama by Big Finish Productions, Harry Houdini's War. This is the conclusion of a trilogy of adventures featuring the Sixth Doctor (Colin Baker). Harry Houdini's War is written by Steve Lyons and features John Schwab as Houdini. 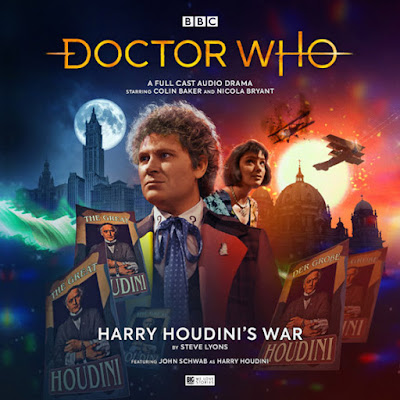 The world is at war, and Harry Houdini wants to fight for his adoptive country. He might get the chance, when an old friend crashes his New York show.

The Doctor is on the trail of a Central Powers spy ring, which has somehow acquired unearthly technology. But he is also keeping a dangerous secret…

Finding himself on the run behind enemy lines, the world’s greatest escape artist has to work out who he can trust – and fast.


Doctor Who: Harry Houdini's War will be released this month and can be purchased at Big Finish.

UPDATE: This can now be pre-ordered as an Audio CD at Amazon.co.uk. Release date October 31 (of course!).

UPDATE #2: Review: Harry Houdini's War is at peace with the facts.