Here's an early heads up that a new biography by Adam Begley called Houdini: The Elusive American (good title) is due for release by Yale University Press on March 17, 2020. The book runs 224 pages and is part of the "Jewish Lives" series. Below is the cover and details. 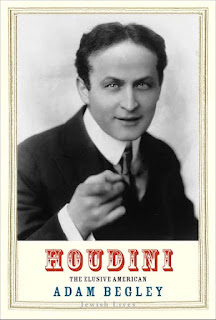 In 1916, the war in Europe having prevented a tour abroad, Harry Houdini wrote a film treatment for a rollicking motion picture. Though the movie was never made, its title, “The Marvelous Adventures of Houdini: The Justly Celebrated Elusive American,” provides a succinct summary of the Master Mystifier’s life.

Born Erik Weisz in Budapest in 1874, Houdini grew up an impoverished Jewish immigrant in the Midwest and became world-famous thanks to talent, industry, and ferocious determination. He concealed as a matter of temperament and professional ethics the secrets of his sensational success. Nobody knows how Houdini performed some of his dazzling, death-defying tricks, and nobody knows, finally, why he felt compelled to punish and imprison himself over and over again. Must a self-liberator also be a self-torturer? Tracking the restless Houdini’s wide-ranging exploits, acclaimed biographer Adam Begley asks the essential question: What kind of man was this?

Adam Begley is the author of Updike and The Great Nadar. He was a Guggenheim Fellow, a Fellow at the Leon Levy Center for Biography, and for many years the books editor of The New York Observer. He lives in England.


You can pre-order Houdini: The Elusive American at Amazon.com and Amazon.co.uk.