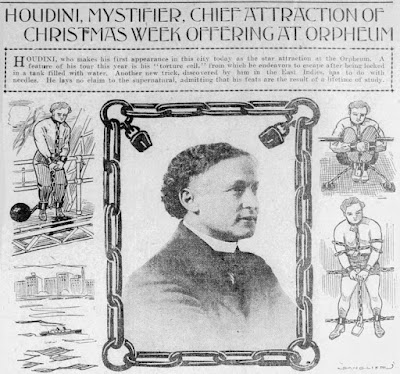 After Houdini's eventful engagement in Los Angeles in 1915, he traveled to Salt Lake City where he opened on December 20 at the Orpheum Theater as their "Christmas Week" attraction. As had been the case in L.A. (and Oakland before that), Hardeen played the competing Pantages Theater.

In Los Angeles, Houdini performed a spectacular suspended straitjacket escape from the offices of the Express-Tribune. The escape was filmed -- likely the first time a suspended jacket escape of his had ever been recorded. That footage would be part of his Salt Lake engagement, as reported in the Salt Lake Tribune on December 19, 1915: 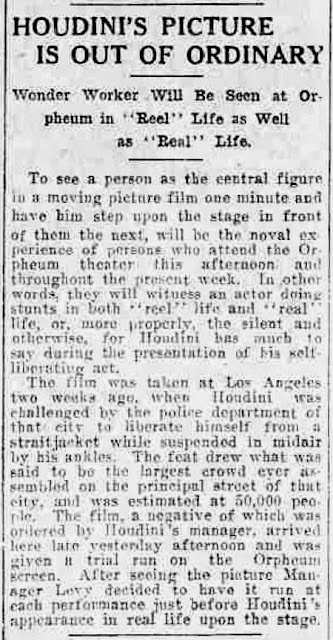 Houdini had featured film of his outdoor escapes as a warm-up for his act since 1907 (beginning with his Rochester bridge jump). During this 1915 tour he was also showing his 1909 short, The Marvelous Adventures of Houdini in Paris, which must have seen a bit dated in a year that saw the release of A Birth of a Nation. But the film of his Los Angeles escape proved to be a hit, and it wasn't long before the citizens of Salt Lake demanded their own test of Houdini's hang time. Houdini accepted the challenge, as reported by the Salt Lake Telegram on December 21:

Houdini, the man of mystery now playing the Orpheum, has accepted a challenge made by the Salt Lake people and will attempt to repeat the feat which he performed in Los Angeles last week that of freeing himself from a straitjacket while suspended by his ankles in midair. The Walker Bank building has been selected as the place for the performance, and he will be assisted in arranging his tackle for the work by a picked squad of the Salt Lake fire department, under the direction if Chief W.H. Bywater.


I like to think of this Salt Lake City escape as a "sequel" to his Los Angeles stunt. Like most sequels, it couldn't claim the same originality, but it did have its precursor beat in one important regard; the choice of location. 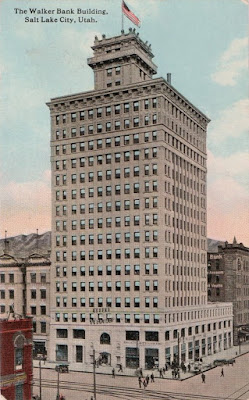 Opened in 1912, the Walker Bank building at 175 South Main Street stood 16 stories and was as the tallest building between Chicago and San Francisco at the time. So this was not going to be missed by any citizen of Salt Lake. And just to ensure this would be an attention getter, Houdini once again enlisted the local Fire Department to be on the scene with their hook and ladder truck.

The escape took place on Wednesday, December 22, 1915. On hand was "a solid mass of humanity" that stretched for a more that a half block north and south of the building. Before the stunt, two firemen, Robert Larson and Frank Spanton, repelled down the rope that dangled from the top of the building. Houdini was then strapped into his straitjacket by detectives Bert Seager and Harlow Lyon. He was then hoisted to the fourth floor. As he was being raised Houdini is reported to have said, "Goodbye inspector. My conscience is clear. Don't tell them anything." (I admit I don't get it.)

It took Houdini three minutes to escape. He was then lowered into a fireman's safety net that had been spread out below him. The next day The Herald-Republican ran a nice photo of the stunt. 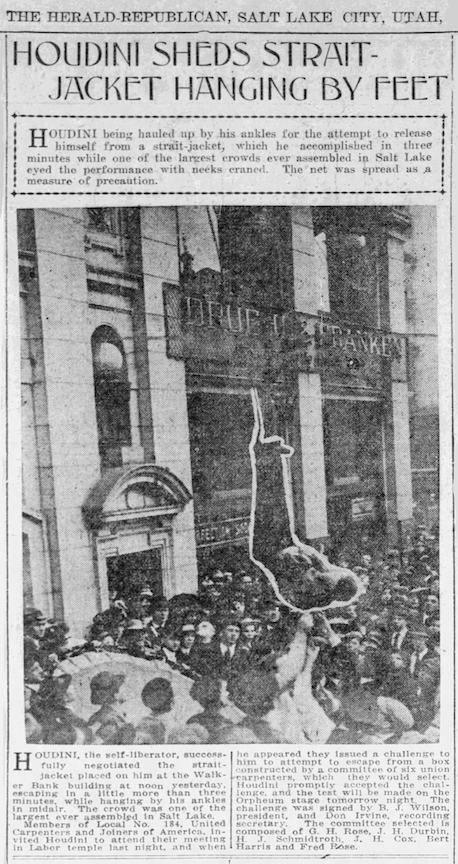 Houdini finished out his engagement with a challenge from the Local 184 Carpenters and Joiners Union to escape from packing case built on stage. His next stop was Denver where, yes, he once again did a suspended straitjacket escape.

Happily, the site of Houdini's Salt Lake City escape survives. Today it is know as the Walker Center. The ground floor exterior has been modified, so the features one sees in the newspaper photos are no longer there. But comparing it to the postcards of the period, it's clear Houdini did his escape above the front of the entrance on Main Street (Google Mapped below). I don't know if the current management (VGM) are aware of their building's role in Houdini history, but maybe they are now! 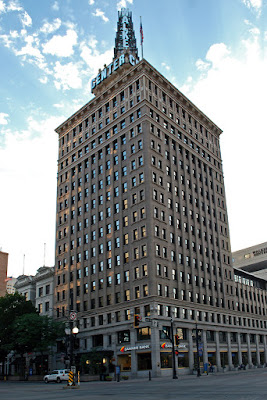