Katie Bender's "Instructions for a Seance" in Austin 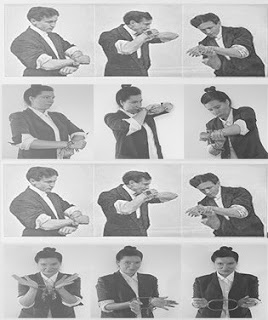 Theater artist and playwright Katie Bender will present a Houdini-inspired one-woman show, Instructions for a Seance, at the Museum of Human Achievement in Austin, Texas, September 19-29.

The show is described as: "Part DIY seance, part historical drag, Instructions for a Seance is one woman’s attempt to contact Houdini from beyond the grave."

In an interview at Sightlines, Bender says she was inspired by the Houdini material she discovered at the Harry Ransom Center while a graduate student at the University of Texas at Austin.

"When I discovered the Houdini archives I was juggling graduate school and parenting, the expectation of familial stability and my desire to live a sort of wayward art monster existence. I’d have these long fantasies about running away to Mexico. So in the dumbest, most obvious of ways, the images of Houdini struggling against a straight jacket strung up above a crowd resonated. I was drawn to the metaphor of escape he embodied."