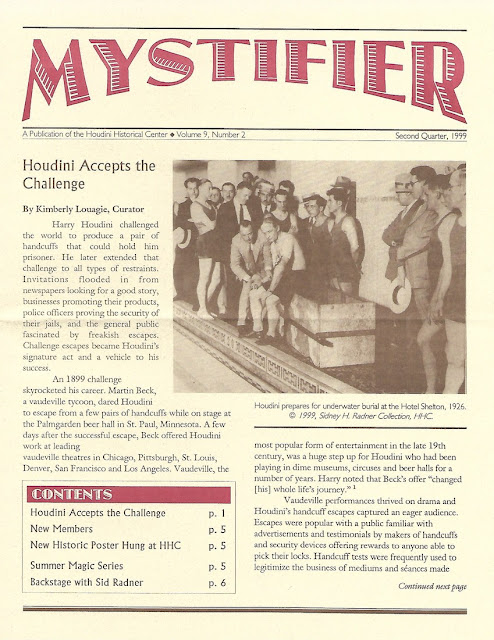 A tonal change came with the Second Quarter 1999 Mystifier, evidenced in the main article, "Houdini Accepts the Challenge," by new curator Kimberly Louagie. For those accustomed to their quarterly Mystifier delivering a deep dive into Houdini history or illuminating some new bit of Houdini minutia, it was a bit startling to read:

Harry Houdini challenged the world to produce a pair of handcuffs that could hold him prisoner. He later extended that challenge to all types of restraints.


The article continues in this very general vein for four of the newsletter's six pages. While it's well-written and researched, it's clear Louagie is writing for a reader without pre-knowledge of Houdini. Maybe this was because Louagie herself was new to the subject. Or maybe it was a deliberate attempt to reach out beyond the base to a more general audience. But I can remember being a bit perplexed by this piece.

Louagie's article is followed by a list of thanks to those who donated in a recent HHC fund raising campaign (talk about the base). There's a photo of the famous 1911 head and shoulders lithograph, part of the Boldt collection, being newly hung in the HHC stairwell. Among the New Members is Dr. Bruce Averbook.

In "Backstage with Sid Radner", Sid again talks about seeing the Houdini musical at the Marriott Theater in Lincolnshire, Illinois. He compliments actor Bernie Yvon who played Houdini in the production. Sid then gives a shout out to Dr. Morris Young's new book, Radio Music Live, 1920-1950. While having nothing to do with Houdini, Young was a well known Houdini aficionado and a member of the HHC board.

Sid then announces that the Official Houdini Seance that year will be held in London, traveling outside of the U.S. for the first time. He also reports that Butterfield and Butterfield in Los Angeles will be holding a major auction "featuring a large number of Houdini items." These turned out to be items from the Houdini Magical Hall of Fame that had survived the fire in 1995.