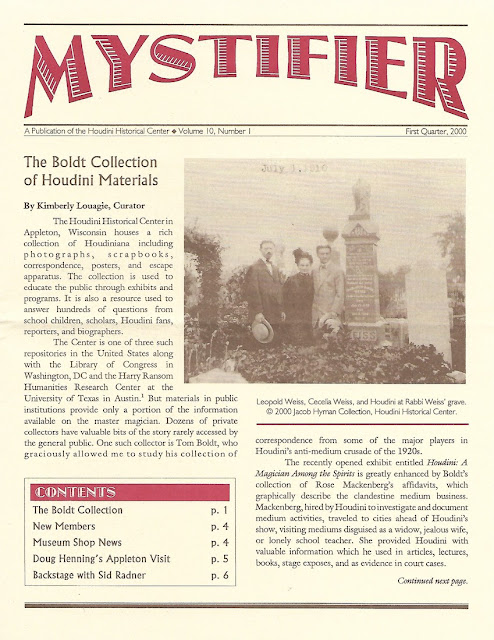 The Mystifier enters the 21st century with an excellent article by curator Kimberly Louagie highlighting items from the Tom Boldt collection. Specifically featured are reports written by Rose Mackenberg for Houdini about her visits to bogus mediums. One such report is reproduced in full. Unlike Louagie's previous Mystifier efforts which seemed aimed at the layperson, there's a lot here for the hardcore Houdini buff.

The newsletter continues with news of new posters at the museum shop created by BVK/MacDonald. Among the listing of new members is Jim Bentley. We then get a real treat; a reproduction of an article by Tom Richard's about Dong Henning's visit to Appleton in 1986. Doug and Debby Henning performed Metamorphosis in Houdini Plaza.

In "Backstage" Sid Radner reports on the success of the HHC website, which clocked 18,165 visitors in the first three months of the new year. He shares news of recent interviews held at the HHC for the History Channel and Discovery. He then reports on the upcoming Houdini Museum adjacent to Houdini's Magic Shop at at the Venetian Hotel in Las Vegas. "Plan are running a little behind schedule, but I am hoping for a May opening," says Sid.

Sid then continues the saga of Donald Fergason, who despite a court order continued to represent himself as Houdini family member and again found himself before a judge. "All very interesting and I will keep you posted with any further developments on the case," says Sid. [I believe I encountered this character still working his con at the Houdini Walk of Fame Star ceremony in 2008.]

The newsletter closes with a photo of curator Kimberly Louagie standing with Houdini's full body punishment suit, a gift to the HHC from Sid Radner.