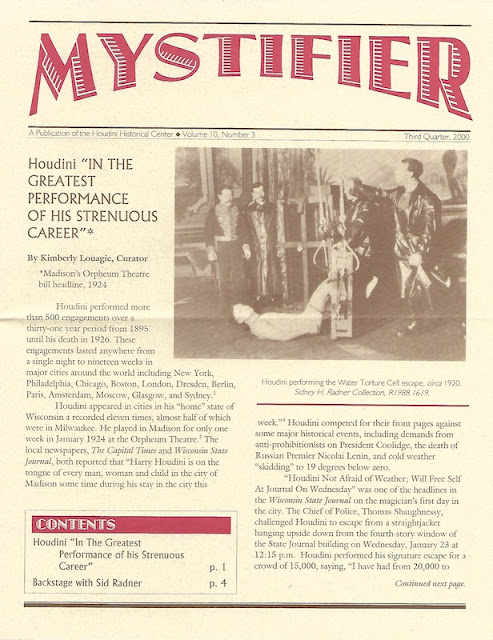 The third quarter 2000 Mystifier runs only 4 pages, but the info contained in those four pages is something special. Curator Kimberly Louagie deep dives into Houdini's appearance in Madison, Wisconsin in January 1924. She then reveals a Q&A with Wisconsinite Morris Grenzow who actually saw Houdini in Madison when he was seven years old.

Grenzow travelled to the HHC on May 31, 2000 to share his memories. A sampling is below.

Q. What was Houdini's opening escape?

A. His first act was escaping from a straight jacket. There were two men there from the Mendota Mental Hospital that put that straightjacket on him I can remember those two guys going around tightening the straps and this and that I would say he was out in a minute or two... Then they had him all chained up and padlocked, but he got out of those chains. Those chains flew ... and the final act was the water chamber. At that time Mrs. Houdini came out on the stage and there was another man there who had a fire axe that stood by the water chamber in case something were to go wrong and probably make it look good.... They lowered him in there upside down and he was in chains... I could see him wiggling around in that water to get out.

Q. What was Houdini wearing?

A. Well, not much of anything really... He probably had tight knit pants and shirt and that was about it. I can remember more about what Mrs. Houdini wore. Her clothes was something you'd wear going to a funeral. Real drab looking, long shirt, you couldn't see much above the ankle. She had a hat like they wore at that time, kind of a felt hat, tight fitting. I have seen Doug Henning and his stage was full of props. But Houdini had practically nothing there. He was there himself [with] the straitjacket, the water chamber, and the chains. But he put on a great performance. He didn't need anything to prop him up.

Q. How did the audience react to Houdini's show?

A. Well, they were very pleased with the performance. I just don't remember that part of it. But my eyes were glued on him every minute he was there. I tell you I think he just kind of held the audience spellbound. They didn't really show any emotion at all. They just couldn't believe what they saw.

In the interview Mr. Grenzow also made the remarkable claim that Houdini escaped from his Water Torture Cell in full view of the audience. CLICK HERE for that and supporting evidence that he might have been correct.

In "Backstage with Sid Radner", Sid announced the opening of the new Houdini Museum at the Venetian Casino in Las Vegas (adjacent to Houdini's Magic Shop). Sid reports the museum displays the original Miss. Undina poster and Houdini's pillory escape. Also on display is an engraved flask from a Superintendent Piece to Houdini.

Sid then continues the saga of Donald Ferguson, the man who claimed to be the grandson of Theo Hardeen. Ferguson's latest move was to evade a court appearance claiming to be ill and confined to his bed. But witnesses reported Ferguson "was seen about town walking, running, driving, shopping, and pushing a stalled automobile" on the day of his scheduled appearance.

Sid closes with a shoutout to the HHC's new "A Magician Among the Spirits" exhibition. He also reports that a "virtual tour" is available on the HHC website.

Contents:
Houdini "In The Greatest Performance of his Strenuous Career"
Backstage with Sid Radner