The owners and occupants of Houdini's 278

The big news of the last month is that Houdini's famous New York brownstone at 278 W 113th Street in New York City is on the market for the first time in 26 years. Having looked at the house inside and out, top to bottom, today I take a look at the history of the house and its various owners and occupants. Including a few ghosts!

At the time of its construction, "278" (as Houdini called it) was located in what the New York Times described as a "genteel enclave" of Harlem. Indeed, both Central Park and Morningside Park are within a few blocks, and it's said the area was populated with affluent German speakers. But exactly when 278 was built isn't entirely clear. Real estate websites such as Zillow show the date as 1890. But the earliest real estate listing for the house (and several others on the block) appears in the New York Herald on April 5, 1896. Interestingly, it reads "restricted."


The first occupants of 278 appear to have been Thomas K. Moore and his wife M.E. Moore. They are the ones selling in 1896 and may have been the original builders. The house is still on the market in May 1897. (You can see that listing here.) On May 2, 1899, the house was purchased my Moses Kahn, his wife Henrietta Kahn, and Theresa Goldsmith with a $10,000 mortgage from Seamens Bank.

The 1900 census shows David Lubin, a Polish inventor and agriculturalist, living at 278 with his wife, Flora, and their four children. It's likely the Lubins were renters. On January 28, 1902, a fire broke out on the second floor, resulting in $75 worth of damage to the building and $135 damage to the contents. The Lubins are still in the house as late as 1903.

In 1904, Houdini bought the house for $25,000 cash (purchase price $20,000 plus $5000 still due on the mortgage). Houdini boasted it was "the finest private house that any magician has ever had the great fortune to possess." But he was really purchasing 278 as a new Weiss family home, and especially as a luxurious new home for his mother. It was a big step up from their previous dwelling at 305 East 69th Street. During these years, Harry and Bess were continually on tour, so 278 was open to any Weiss or Rahner in need of a room. Houdini even once referred to it as "my apartments."

278 also became the home and workplace of Houdini's brother Dr. Leopold Weiss (well before the brothers had their famous falling out). Leopold was New York's first radiologist, and he set up his practice in the house. In 1907, Leo survived an attack by an intruder wielding a razor. The papers reported on the incident and later the capture of the assailant, Frank Thomas. But none of the newspapers mentioned Harry Houdini as the owner of the house.

In July 1913 Houdini's mother died. Her death devastated him. Several months later, Harry and Bess moved in with the Hardeens in Flatbush and put 278 up for sale at a "sacrifice" price of $18,000. Below is the listing in the August 23, 1914 New York World.


Why did Houdini want to sell? Most biographies say the house just contained too many memories of his mother. This sounds perfectly valid. But Houdini collector Jon Oliver (who owns furniture from 278, including Houdini's bed) says Harry Hardeen Jr. told him the real reason was that mama's body had remained in the parlor for a full week that it took Houdini to return from Europe, and the smell made the house uninhabitable. This might explain why the house never sold. Instead, he rented it out to student members of Sigma Alpha Mu, a Jewish fraternity at nearby Columbia University.

Either the house had a good airing out or Harry was finally able to shake his grief, because after four years with the Hardeens [read: The Flatbush years], Harry and Bess moved back into 278 in February of 1918. In July, Houdini transferred ownership of the house to Bess. Because of this, some newspapers mistakenly reported that Houdini "has just purchased a new home in Harlem."

Houdini then made 278 the home and "Houdini Central" that it had never really been before. At one point, Bess's mother Balbina Radner moved in permanently. The house also saw a succession of live-in maids and no shortage of animals. Visitors spoke of the trick front door that opened from the hinges, and also the fact that Houdini had wired the house for sound so he could amaze visitors with his "mind reading" prowess. Stacks of books and files filled every available space. Houdini once said, "I actually live in a library."

In fall of 1926, as Houdini was embarking on his tour, he reportedly stood outside 278 in tears. When Joseph Dunninger, who was driving him to the train station, asked him what was wrong, Houdini replied that he had seen his house for the last time. He was right. Houdini died that Halloween.

Six months after Houdini's death, Bess sold 278 to her neighbors, John and Filippina Bonanno for just $3000. A mortgage was arranged that had the Bonannos making twice yearly payments to Bess with 6% interest. While Bess had (amazingly) cleared the house of Houdini's collections, donating them to the Library of Congress and the New York Public Library, she left furniture and Houdini ephemera (including a Milk Can) in the basement. This appears to have been fine with the Bonannos, and everything remained there well after Bess's death in 1943.

Rose Bonanno, who knew Houdini when she was a child, was a good custodian of Houdini history. She did not make radical changes to the house, keeping as much of the original woodwork and period fixtures as possible. The house even remained on D.C. current well into the 1980s. In 1953, she welcomed Houdini producer George Pal to the house, whom she felt bore a resemblance to Houdini. Dunninger and Blackstone were also visitors.

Rose also allowed Houdini séances to be held in the house. During one séance in 1949, Rose claimed to receive a phonecall from Houdini who instructed the sitters to look at "Paper Magic, page 118, Fig. 12." (There is no Fig. 12 on page 118.) A photo of the last séance, done as a live Halloween broadcast in the early 1970s, appeared in Walter Gibson's The Original Houdini Scrapbook. 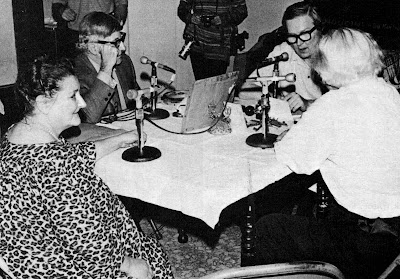 Rose kept up her twice yearly payments (in June and December) to Bess's sister, Marie Hinson, who had inherited the mortgage. With each payment, she included a friendly note. In one she wrote that she recently read Houdini The Untold Story by Milborune Christopher. "It is not a bad misinformed book," she told Marie. "He wrote nice things about him."

But her letters also sadly track the downfall of the area. In 1972 she wrote:

"We are all fine and always working hard to keep the house up but the neighborhood is in a deplorable condition. It's more like a slum, everyone back and front of houses, houses boarded up and windows broken and plenty of fires."


When Rose died on September 19, 1978, her brother, Rev. Charles Bonanno, inherited the property, but was unclear where the mortgage stood. "You see my sister died so sudden that I am not familiar with her debts and income," he wrote to Marie, now 92.

With the help of Marie's son, Vincent, Charles paid off the remainder of the mortgage ($750) on July 10, 1979. Now in a nursing home himself, he was eager to sell, but found it difficult. "On fifth avenue it would be worth a good deal but not in Harlem," he complained to Marie. "The section is very poor full of drug addicts and muggers." Indeed, the area had become so bad, the man who watched after the property would cover the front steps with lime to keep the junkies off them.

At one point Charles reported that he might have a possible buyer from the world of magic.

"Got a call from Rochester from a Mr. Peter Ruff (Houdinii) uses Harry's name with a extra "i" to his name, wants to buy the house if the price is right. I don't know what to say as I have no idea what to charge for it, have you ?? Hope I get a buyer soon as I can't hold out too long with the tenants in it taking advantage of my absence from the house and doing what they want." 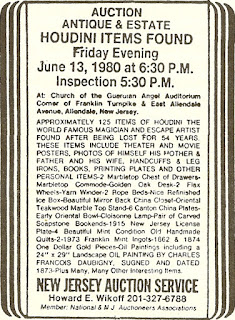 Charles eventually sold the house in April 1980 to Louis Moise. At this time the basement was finally cleared and its contents and auctioned off in a general estate sale in New Jersey. Houdini buffs in the know walked away with countless treasures, including posters and portraits of Houdini's mother and father. (Read: The greatest Houdini auction ever.)

But treasures remained. In 1985, magician and Houdini buff Dixie Dooley paid a remarkable visit to the house (covered in his book, Houdini Question Reality). At this time, the house had a tenant named Mr. Wilkes. Wilkes did not allow Houdini fans into the house, but on this stormy night he made an exception for Dooley. In fact, not only did he allow the magician to see the entire house, but in a story that makes all Houdini fans green with envy, he gave Dixie posters, a printing block, an overboard box and a spirit table, all of which had somehow been lingering in the house all these years. Wilkes refused money for the items. The fact that Dixie promised to "treasure them" was good enough for him. He then told Dixie that the spirit of Houdini was a regular visitor. "One night he turned the lights on and woke me up from a sound sleep," said Mr. Wilkes. 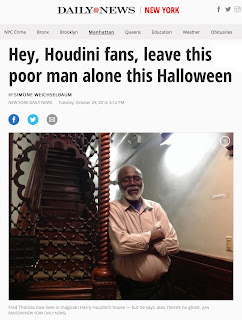 In 1991, Fred Thomas purchased the house from Louis Moise. Thomas claims he had no idea it was Houdini's former home until his neighbors told him so. But Thomas shut out Houdini fans and historians, saying, "People are always outside taking pictures of the house. I've developed a callousness." A profile of him in the Daily News was headlined: "Hey, Houdini fans, leave this poor man alone."

Thomas lived on the first two floors (Garden and Parlor) and turned the top two floors into rental apartments. It's said during the renovations a stash of valuable Houdini silent movie posters were discovered in the walls. He also added a call box to the front of the house, which robbed it of any potential status as a historical landmark. (A historic plaque was eventually installed as part of the Cultural Medallion Program). In 2000, Thomas took out a $100,000 mortgage on the house, which was paid off in 2010.

During Fred Thomas's ownership, the only glimpse of the inside of 278 came when one of the apartment units came up for rent or a resident threw a party. The all-important parlor level, where Houdini had his trophy room and library, remained closed off to all. But Thomas's investment paid off as the area dramatically improved.

Today 278 is on the market for $4.6 million, ironically returning to its relative value in 1904. On June 18, 2017, there was a one time only open house that finally gave Houdini fans a chance to see inside [covered in detail here]. Happily, much of the house has remained intact, especially the parlor. It's still very much the house Houdini inhabited.

The sale of 278 is being handled by Douglas Elliman Real Estate. As of this posting, I've not heard of a buyer. But let's hope whomever becomes the next owner of 278 honors its historic connection to the world's greatest magician, and will continue to preserve those parts of the house that have remained unchanged and still hold that Houdini magic.

A very big thanks to Tom Interval and Bill Mullins for uncovering the pre-Houdini history of 278 and sharing their research. Thanks to Fred Pittella for allowing me to share his 1914 real estate listing. And a very big thank you to John Hinson for providing me with the original mortgage and correspondence between Marie Hinson, Rose and Charles Bonanno.