Here's a page from the December 1918 issue of Film Fun, a New York based movie magazine. Some nice shots here of Q the Automaton from Houdini's The Master Mystery. But what's odd is they refer to the title of the serial as "The Great Grey Mystery."

By December 1918 the first chapters of The Master Mystery had been released to theaters, so I don't know why the magazine uses this title, nor where it came from. As it says; "It's a Mystery."
Speaking of the Automaton, last year some side panels from the 2017 Houdini Pinball machine sold on eBay. On one side you can see the Automaton and his...Automawoman? 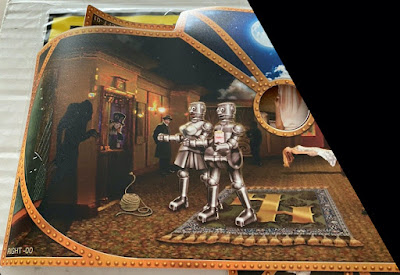 Below are a few more links for the Automaton aficionado.