Look who dropped by the L.A. Magic History Conference

The 14th Los Angeles Conference on Magic History was invaded last night by Houdini's arch foe Q The Automaton! He not only intimidated attendees in the conference museum, but he also marched out on stage! It was terrifying.

This is not the original Automaton from Houdini's 1918 movie serial The Master Mystery (which is, presumably, long gone). This is a faithful reproduction made by the great illusion builder John Gaughan specifically for this year's conference. John lectured on "Automata in Film" and for the grand finale was joined on stage by Q. However, this Automaton was not controlled by clockworks and servos. As in the movie, there was a man inside the suit -- John's assistant, Jeff Chang.

After the big show, Q mingled with guests in the courtyard of The Garland hotel and, as you might expect, was very popular. 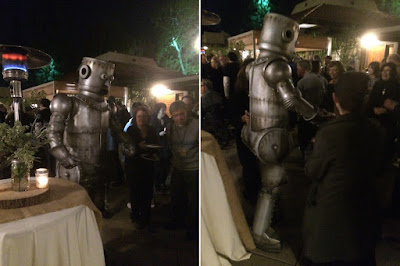 During the three day conference, John Gaughan's Q The Automaton was on display in the conference museum where attendees could get a good closeup look. It's really a magnificent reproduction and wonderful to see Houdini's arch enemy -- and the very first movie robot -- brought back to life (so to speak). 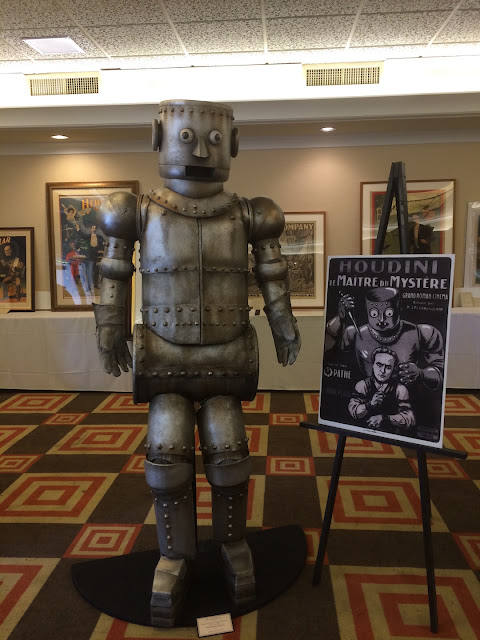 The 14 Los Angeles History Conference was held November 5-7 at The Garland hotel in Studio City, CA. This biennial invitation only conference is co-hosted by Mike Caveney, John Gaughan, Jim Steinmeyer and Frankie Glass. This was my first conference and I had the time of my life! I'm overwhelmed this morning thinking about all that I saw and learned. I'm also moved by how welcome this amazing group of historians and magic professionals made me feel.

The full conference events typically get excellent coverage in Genii, MAGIC, and Magicol, so I'm not going to spill all that happened here. But I will be back with a report later in the week with some of the Houdini-specific details and moments that really stood out for me. But I felt the need this morning to report the Breaking News that Q The Automaton -- just like his historical relation, The Terminator -- is back!

UPDATE: REPORT: Inside the L.A. Conference on Magic History.