Are there Houdini handcuffs at the bottom of the Harlem River? 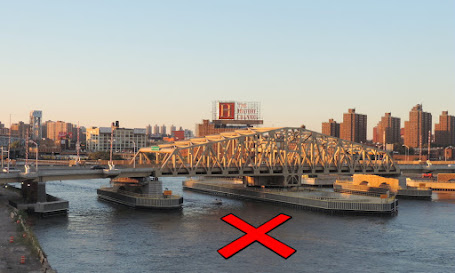 Here is an account of a little-known Houdini underwater escape in New York City on April 3, 1912. Houdini had planned to leap from the Willis Avenue Bridge into the Harlem River. But police forbade a jump from the bridge itself, so a rowboat had to suffice. But there's another detail here that really stands out. Houdini left his handcuffs and irons at the bottom of the river!
This isn't the only time Houdini did an underwater escape from a rowboat, so I can't say whether the below image from Shutterstock is from this specific jump. But his age looks right. The escape was also filmed. So what about the claim that Houdini left his manacles in the river? This is the only time I've ever heard of him doing such a thing. Did the reporter get this right? If so, I doubt it was intentional as these would have been his own special "jump cuffs." So he might have accidentally dropped them. That would mean they are still there!
Wouldn't it be something if these cuffs could be recovered? They would have instant provenance and be valuable handcuffs indeed. The original Willis swing bridge was replaced with a new one 2010, but the location remains the same. So maybe it's time to break out the scuba gear!
This week Houdini was playing the Bronx Theater, located at 149th and 3rd Avenue. This was his first and only appearance in the Bronx. The theater survived until 2010 when its auditorium was finally razed. The exterior of the building survives as part of a hotel.