The Zanetti Mystery by Houdini

I'm re-sharing this as Joe has now completed posting all eight chapters. A standing ovation for Joe's work here! Now who's brave enough to read it?
Joe Notaro at Harry Houdini Circumstantial Evidence is sharing all eight chapters of Houdini's The Zanetti Mystery, which was serialized in newspapers beginning in December 1925 and marked Houdini's last piece of published fiction. The story nicely combines Houdini's love of mystery and detective yarns with his crusade against fraudulent mediums. The character of Zanetti can also be seen as the dark side of Houdini -- maybe what Houdini feared he would have become had he remained a fraud medium. Houdini would sometimes play Zanetti on stage during his exposure act.
Joe is sharing the original newspaper installments with illustrations by Edmund Fredrick. Chapter 1 is available now. I will add links as Joe posts each new installment below. Enjoy! 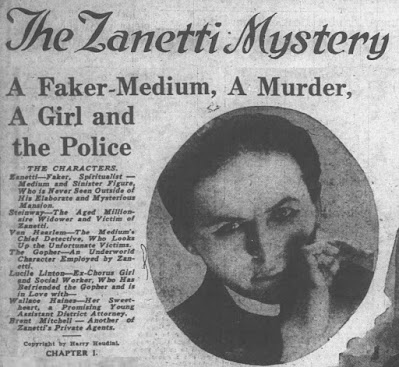