One of the things Hollywood gets wrong about Houdini is showing him bellowing onstage how no one ("Not even God!!!") can hold him a prisoner. But had Houdini done this in reality, audiences would have surely turned on him and rooted for such a braggart to fail. While Houdini was a boaster off-stage, on-stage he actually presented a more humble persona. He would famously say to his audience, "I don't know if I'm going to get out of this, but I assure you I am going to give it my best." He presented himself as the underdog and audiences rooted for him.
Of course, Houdini always did escape. But he also went out of his way not to humiliate his challengers. No escape was ever presented as easy, even when it was. Houdini would frequently say he had never faced such a well-made packing case or a more expert rope tie. He left good will in his wake.
The below is a nice example of this. This ran in the The Wisconsin State Journal following Houdini's suspended straitjacket escape from the State Journal building in Madison on January 23, 1924.
Of course, there were exceptions, such as William Hope Hodgson in Blackburn. And later in his career Houdini did do some on-stage boasting. A 1922 review in the Baltimore Evening News complained, "Houdini spends about 10 minutes telling of his greatness, then performs two tricks that he has been showing for years." But in this case he was boasting of past triumphs.
Okay, so maybe Hollywood got it half right. 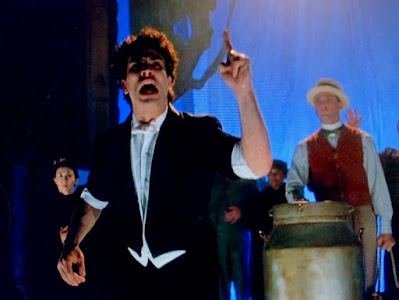