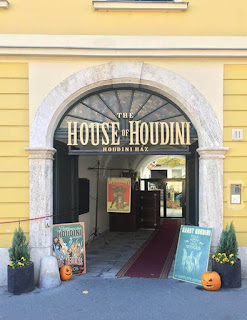 A private investment fund, CCV (Centurion Capital Ventures), is offering David Merlini $18.6 million for his House of Houdini museum in Budapest and the rights to Houdini's name. David controls the use of "Houdini" in the EU. The news broke via a press release late last month.

David has now confirmed for the Hungarian news outlet Blikk that the offer is legitimate. Says David, "I can’t comment on the details of the deal, but I have to make the difficult decision in days."

David Merlini opened The House of Houdini in 2016. Is the only Houdini museum in Europe. The museum, which is located in Buda Castle on Castle Hill, had reopened for business. But due to a Covid spike in Hungary, the government is once again ordering all museums to close.

UPDATE: No sale for The House of Houdini in Budapest.