Here are some early illustrations from Houdini's prime "Handcuff King" days. What I really like about these is they give us a good look at his "Ghost House." This is the small tent-like enclosure where Houdini would do his handcuff escapes surrounded by a committee from the audience. These drawings give us a good idea of its scale. Newspapers reported that it was red.

The name "ghost house" can be seen as a nod to a medium's spirit cabinet, which shows how Houdini's handcuff act had roots in spiritualism. The only photo of the ghost house that I'm aware of is the famous shot of Houdini being locked in the Mirror Handcuffs on stage at the London Hippodrome in 1904. It's a little hidden among the committee. In fact, I bet some have never even noticed it! 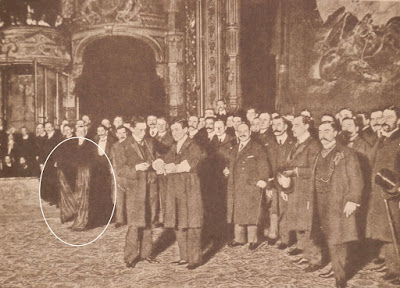 I wonder what ever happened to Houdini's ghost house? How extraordinary would it be to see this piece of Houdini history today. Alas, the ghost house seems to have vanished...like a ghost!
If you enjoy Houdini artwork like this, check out my Facebook page Houdini Illustrated where I share images that don't always make it to the blog.