Hardeen in the House!

George Hardeen, grandson of Theo Hardeen and great-nephew of Houdini, has traveled to his ancestral home of Budapest, Hungary, where he will spend Halloween with David Merlini and gook folks at The House of Houdini museum. Below is the museum's release announcing their honored guest. 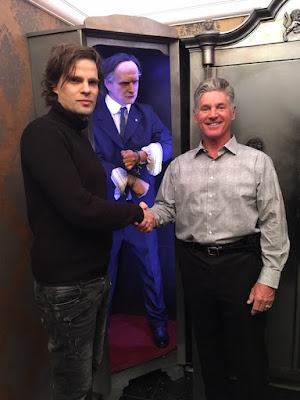 Budapest, HUNGARY – David Merlini, owner and founder of The House of Houdini Budapest, has invited George Hardeen—Houdini’s great-nephew—to visit Europe’s one and only Houdini Museum on October 31, the 91st anniversary of Houdini’s death on Halloween night, 1926.

Houdini was born Erik Weisz in Budapest, Hungary. He "borrowed" the name Houdini from French magician Jean-Eugène Robert-Houdin. Houdini’s younger brother Theodore, who was also born in Budapest (as Ferenc Dezső Weisz) took the name Hardeen because it sounded like Houdini. Their father left Budapest in the late 1870s and settled in Appleton, Wisconsin, where he became the town's first rabbi. Houdini and Hardeen often performed together. Theo was a brilliant magician and escape artist in his own right. Houdini and his wife, Bess, had no children, and when he died on Halloween, 91 years ago, he willed all of his props to Theo. Theo Hardeen even named one of his sons Harry Houdini Hardeen (George Hardeen's father).

About George Hardeen
George Hardeen, 65, didn't find out he was Houdini's great-nephew until he was a teenager, as his father never talked about the connection—or mentioned his middle name. George Hardeen's grandfather died before he was born. When George Hardeen moved to northern Arizona in the early 1980s to pursue a career in journalism, he fell in love with the people and the landscape and never left. „The Houdini legacy has taken a new branch – Hardeen says - because my wife is Navajo and my children are enrolled members of the Navajo Nation.” George Hardeen travels to Budapest for the first time to pay a visit to The House of Houdini, a privately held museum dedicated to he memory of Harry Houdini.


For more on The House of Houdini visit the official website. For more on George Hardeen, check out this excellent NPR profile from Halloween 2011.