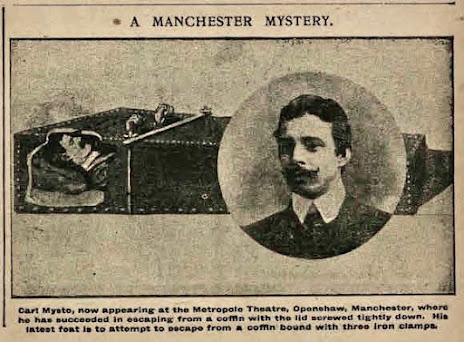 Contrary to popular belief, Houdini did not go after each and every imitator of his act. Theaters were awash in Houdini wannabes, and to have tangled with them all would have left no time for his own act and just brought them publicity. So unless an imitator made false claims about Houdini or used his name in their advertising, he largely ignored them.
In 1903 an escape artist who called himself Carl Mysto began performing challenge escapes in the UK. This was not typical of other Houdini imitators who largely confined themselves to the handcuff act. One of Mysto's feats was to escape from an "iron-bound coffin" with his hands manacled through holes in the top. The escape was a good one and it drew a fair amount of attention, even landing Mysto a photo spread in the Houdini friendly London Daily Illustrated Mirror (above and below). 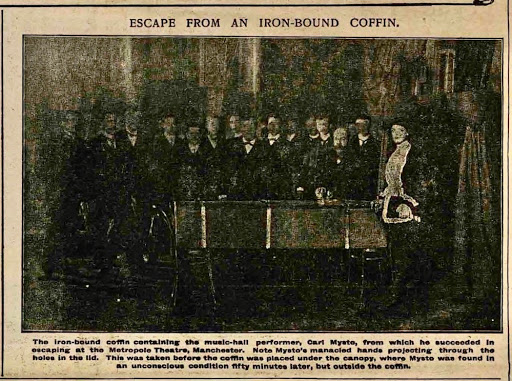 Houdini had first met Mysto in October 1902 when the budding magician wrote asking if Houdini could arrange an audition. Houdini remembered: "Carl Mysto at the time was working in pubs, doing magic and passing the hat. He was a tramp. I gave him a pair of pants and a few old shirts and half a dollar. He gave a trial show and did not make good. He was a common bum and a dirty one at that."
In September of 1904, both Handcuff Kings found themselves playing opposite theaters in Salford near Manchester. Houdini was at the Regent Theatre of Varieties and Mysto at the Hippodrome. Mysto ran into trouble during his first week. On September 21 he was summons to the Salford police court on a charge of stealing a pair of handcuffs from a challenger, Thomas Skellington. The case was dismissed.
Did Houdini have a hand in this? If so, it could help explain why the Hippodrome's manager, Broadhead, felt compelled to take a swipe at Houdini during a manager's meeting, saying Mysto gave a better show and did not "talk endlessly of his triumphs." Furthermore, at £10 a week, Mysto made a better profit than Houdini at £150 a week. Houdini's hatred of imitators was matched only by his hatred of unscrupulous managers, and when he learned of Broadhead's words the gloves came off.
Instead of challenging Mysto to a coffin breaking contest as one might expect, Houdini took an approach wholly bent on ruining his signature feat. He paid the man who made Mysto's coffin, Reuben Shaw, to make him a duplicate. He then exposed the escape on the stage of the Regent for two straight nights. The London Daily Illustrated Mirror ran a story complete with photos. Below are those two photos showing Franz Kukol and Hardeen (presumably standing in for Shaw) assisting in the exposure. 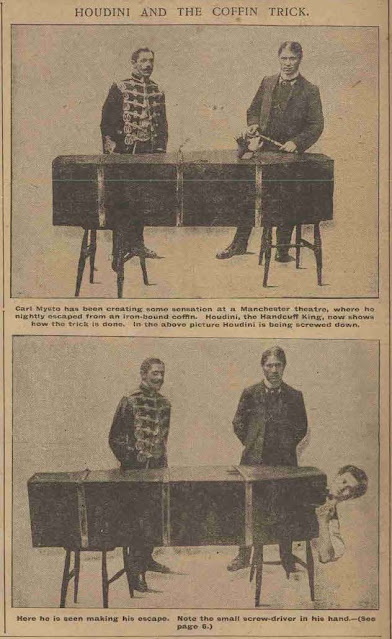 Unlike the stories of Houdini undoing Kleppini with the French Letter Cuff or Frank Hilbert with a crafty disguise, the Mysto affair doesn't present Houdini in an especially heroic light. It's an out-and-out exposure of another magician's original invention and a clear breech of the Magician's Code. Local magicians were said to be "blazing with anger", and at least one reader of the Mirror found Houdini's behavior unsportsmanlike:

Houdini portrayed his actions as providing a public service, saying the use of a coffin was "entirely out of place" and that after his exposure "no coffin will ever again be used as an accessory to a public amusement." Privately he told local magician Harry Whiteley that he regretted exposing the coffin trick, but his fight was with Broadhead, not Mysto. The incident did not hurt Mysto, who suddenly found himself in demand. But it also opened the door to exposure acts, many of which would target Houdini.
Despite Houdini's claim to have made the theatrical world safe from coffins, in January 1907 he presented his own coffin challenge escape at the Boston Athletic Association. That coffin is on display today at the Houdini Museum of New York along with an original poster from the 1904 Mysto exposure. 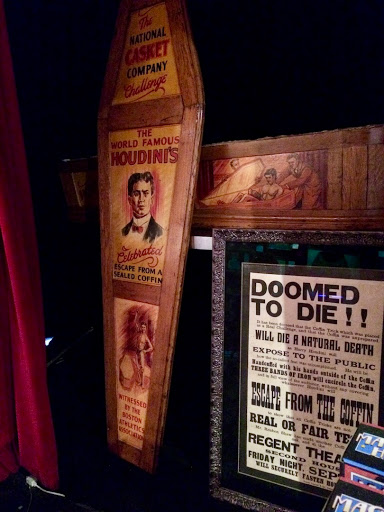 Thanks to Joe Fox for helping me uncover the Harry Whiteley letter and the name of manager Broadhead. For more on Mysto in Salford check out Harry Houdini Legend & Legacy by Brian Lead and Roger Woods, 1993.