Concluding my issue by issue look back at the Mystifier, the newsletter of the Houdini Historical Center that ran from 1991-2003. 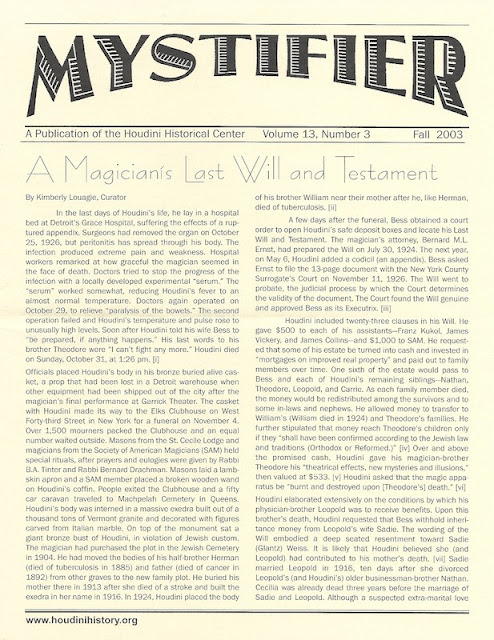 It seems fitting that the final issue of the Mystifier consists of a single article about Houdini's Last Will and Testament by Curator Kimberly Louagie. As with all of Louagie's work, it's well researched and thorough.

Sidney Radner did not provide his regular "Backstage" column this time. Instead, the back page contains a letter from Executive Director Terry Bergen explaining the current situation and future of the HHC.

I'm sure many of you have heard rumors about the changes at the Houdini Historical Center. It has been a most interesting and enlightening year!

For fifteen years, we have been fortunate to be able to lease the Radner collection of Houdini artifacts. This opportunity has allowed the Outagamie Country Historical Society to develop the Houdini exhibit, as well as temporary exhibits, and the Houdini Historical Center. The original contract expires at the end of this year, and the economy has conspired to prevent us from extending the lease. Our county appropriation was cut 25% in 2003 and another 25% will be cut in 2004. The county funding is what has paid for the Houdini lease for the past 15 years.
Mr. Radner and other generous donors have provided the museum with a number of artifacts which will allow us to create a new exhibit about Houdini called "a.k.a. Houdini". The new exhibit will open in June 2004, and will be double the size of the current Houdini! exhibit. The Society plans an exhibit that will be a dynamic and exciting as the man Harry Houdini. The new exhibit will display fewer artifacts that the one which has featured Mr. Radner's extensive collection, but it will tell the story of Houdini's life images, interactives and artifacts.
Many of our HHC members have asked about the future of the Houdini Historical Center, now that the Radner Collection will be leaving the museum in Appleton. The Houdini Historical Center will continue, however, due to loss of staff caused by budget cuts, the Mystifier will be discontinued for 2004.

Bergen goes on to say that a new HHC website with a special "Members Only" section will be created. If this happened, it was only temporary. With the end of the Mystifier came the end of the Houdini Historical Center and the museum was renamed The History Museum at the Castle. And when the much touted new Houdini exhibit opened in 2004, magicians were shocked to see it exposed Houdini's Metamorphosis.
Despite criticism from magicians such as David Copperfield, the museum refused to change the exhibit, and any hope of the Radner collection ever returning to Appleton was dashed. (Sid said he was planning to bequeath his collection to the HHC.) Sid singled out Bergen for the turn of events, telling the New York Times, "She doesn't know Houdini from Liberace. She just knows dollars."
Sid's collection was auctioned in 2004. Terry Bergen remained director of The History Museum at the Castle until 2013. The a.k.a. Houdini exhibit can still be visited today.
I hope you enjoyed my look back at all 48 issues of the Mystifier. You can start all over or select an issue of your choice via the links below.
PREVIOUS ISSUE | INDEX | FIRST ISSUE
Related:
Written by John Cox at 7:29 AM