The below appeared in The Pittsburgh Press on March 17, 1908 and offers might be the very first public image of Houdini's Milk Can escape. This is a mere six weeks after he introduced the effect in St. Louis. In fact, Houdini didn't even have a name for it yet, and during this run at the Grand Theater he offered $25 to the anyone who could come up with the best name. (I've found no account of the prize being awarded.) 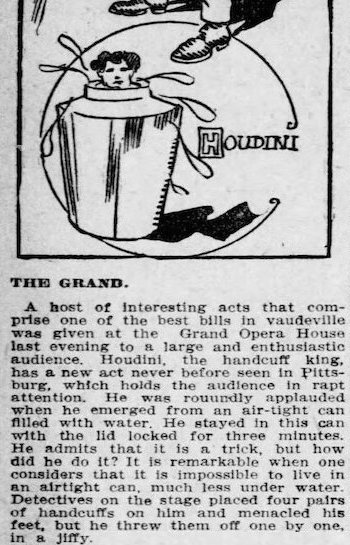 This illustration pre-dates the famous series of photos Houdini took with the can in June of 1908. Those photos are, incredibly, the only known images of Houdini with his Milk Can. I don't know exactly when Houdini created his famous Milk Can poster.

Below is an ad for Houdini's week in Pittsburgh referencing his "unprecedented and hitherto unknown and unnamed mystery." 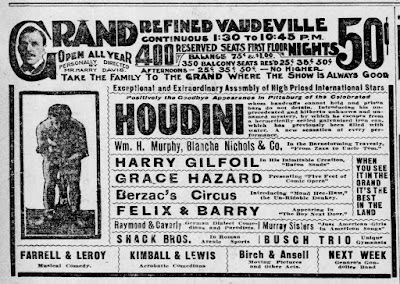 UPDATE: Fred Pittella has shared a program from the Columbia Theatre in St. Louis during the first week Houdini presented his Milk Can and it shows he offered the $25 award for the best name during that engagement as well. By the way, it doesn't appear he ever actually found a name. While we call it "the Milk Can" today, Houdini's advertising continued to refer to it only as the "Galvanized Iron Can filled with water and secured by six padlocks."

Email ThisBlogThis!Share to TwitterShare to FacebookShare to Pinterest
Tags: [History], 1908, Artwork, Milk Can