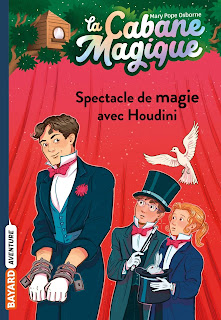 Attention completists. A new French edition of 2013's Hurry Up, Houdini by Mary Pope Osborne has been released by Bayard jeunesse. While the French translation was first released in 2014, this refreshed paperback sports new cover art and a slightly different title. Illustrations are by Philippe Masson.

The fictional book tells the story of two kids who set out to discover the secret of Houdini greatness via some time travel magic.