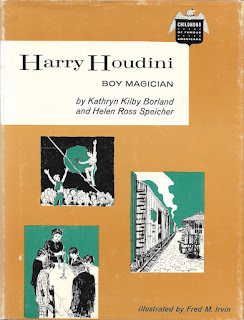 Harry Houdini Boy Magician by Kathryn Kilby Borland and Helen Ross Speicher is a book that seems like an outlier in the world of Houdini juvenile biography. Released in 1969, it offered something both familiar and unique. Stylistically it falls somewhere between Scholastic's popular The Great Houdini by Williams & Epstein and Houdini Master of Escape by Lace Kendall. Clocking in at 200 pages, it's a legitimate biography like Epstein. But with its focus on Houdini's early years and narrative style, it offers a Kendall-like reading experience. On top of this are illustrations by Fred. M. Irvin that are as vivid as those soon to appear in illustrated gems like Harry Houdini Master of Magic.
But this could be just be my own personal perception and I discovered this book relatively late in my Houdini education and I remember having trouble reconciling how there could be be yet another Houdini biography? Ha!
Harry Houdini Boy Magician was first published as a hardcover by the Indianapolis-based Bobbs-Merrill Company in November 1969 as part of their popular Childhood of Famous Americans series. The first edition (above) featured a yellow cover with a selection of Fred M. Irvin's artwork. The front boards mirror this same art. The first paperback edition (below), featured the same artwork, but without the color.
Harry Houdini Boy Magician went through multiple printings and several different cover designs over the next few years. Below are several of these, some library bound, with variant cover art. Frustratingly, all their copyright pages show the original 1969 publication date, so one can't tell when they were actually released. 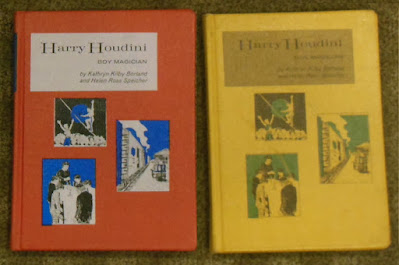 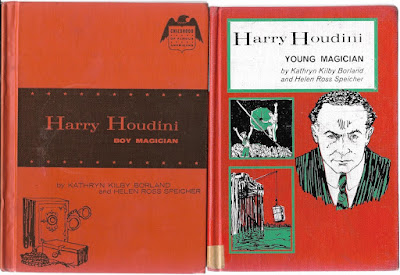 Notice the last book features a new title: Harry Houdini Young Magician. This book appears to be from 1974. Until I discovered this, I would have told you the title change came much later. Ironically, the cover nows features a portrait of the old Houdini.
In 1991 Aladdin Books reprinted the Childhood of Famous Americans series including Harry Houdini Young Magician. The Aladdin paperback retains the Fred Irvin illustrations, but now only in black and white. The Aladdin editions also drop the timeline and study aid found in the back of the original hardcovers. 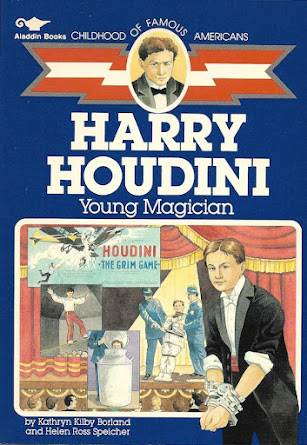 There have been many Aladdin editions and subtle changes in cover art over the years. But, once again, the copyright pages only show the 1991 first paperback printing date, so exactly when each of these variants appeared isn't clear. Oddly, later editions credit the illustrations to co-author Helen Ross Speicher on the cover while still acknowledging Fred M. Irvin inside. 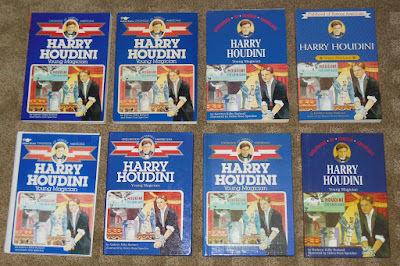 Today Harry Houdini Young Magician can still be found in bookstores while Epstein and Kendell have long ago gone out of print. So what started out as an outlier is today the oldest juvenile Houdini biography still available to young readers. So maybe we should call it The Survivor!
Thanks to Arthur Moses for his help and sharing images from his collection.

Other selections from the WILD ABOUT HARRY bookshelf:
Written by John Cox at 9:20 AM