On Monday there was some excitement on eBay when six original Houdini wood printing blocks appeared from a seller in Florida with relatively low Buy It Now prices (which quickly shot up as they started selling fast!). When the dust settled, I was thrilled to come away with the below. 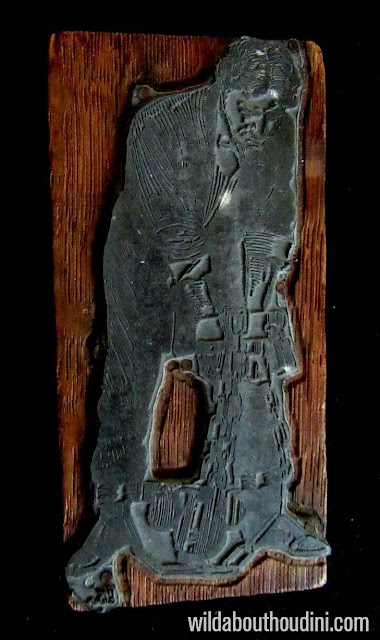 Wood blocks like these were used in the printing of newspapers and other print media and can be one of a kind. The seller says she found the entire set at an estate sale of a 90+ year-old man. Three of the blocks are etched plates like the above and three are photos on copper. The largest of these is the well-known "Houdini at Different Ages of His Career" page from his pitchbook. Below are the auction images.

While I recognize all these blocks from their newspaper appearances, my own block is a bit of a mystery. While I suspect it was also used in newspapers, the only image I've found so far is the below print in the McCord Museum. Is this the original drawing from which this block was made? You'll notice it has the artist signature. Unfortunately, I can't make it out. [See UPDATES.]
I would love to more more about printing blocks in general. Were they all one of a kind? How did newspapers acquire them? Would Houdini have provided them himself? If you have any answers, please let me know in the Comments.
Thanks to Todd Karr of The Miracle Factory for giving me the heads up on these!
UPDATE: Chuck Romano of My Magic Uncle tells me the artist here appears to be Howard K. Elcock, an English pen and ink illustrator who did a lot of artwork for Will Goldston's publications. The following is from The Magazine of Magic, February 1915: 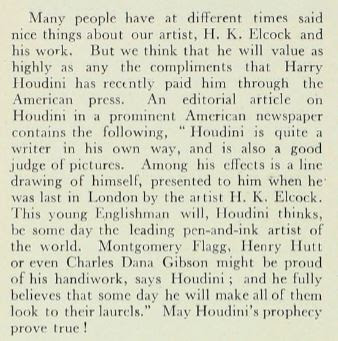 UPDATE: Another development. I've just discovered this illustration appears in the "Revised 1920" edition of Houdini's The Adventurous Life of a Versatile Artist pitchbook (below). Curiously, the illustration is not in the later "Revised 1922" edition. Instead, the original photograph appears in its place. Maybe he lost the block! 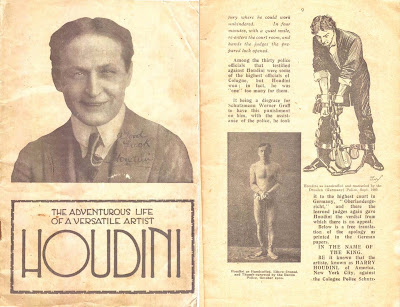 UPDATE: I've now learned these plates came out of the famous 1980 278 estate sale. Also, what the seller told me about these coming from the estate of a 90+ year old man may not be accurate.
Related:
Written by John Cox at 8:05 AM