Magician Franz Harary recently live streamed a tour of the American Museum of Magic's Research Center with Curator Jeffrey Alan. This part of the museum is not open to the general public. Inside are some true treasures, including many Houdini items. You can rewatch the video in full on Facebook.
One thing that stood out for me was an original King of Cards poster made of "fabric". I've never heard of a poster from this era printed on fabric (and would love to be educated). But I can see how it makes sense, especially for a traveling show. This has a Welsh Bros. circus header which dates it as 1898. I'm wondering if this is the same poster that was uncovered by Edward Saint and featured on the cover of Genii in October 1941? As far as surviving King of Cards posters go, this has to be one of the most intriguing. 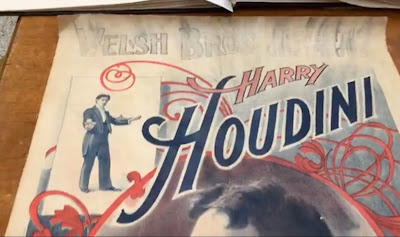 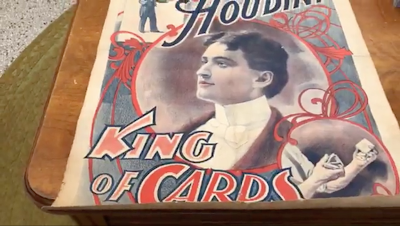 Several other interesting Houdini items are shown, including the brass pails used to fill the Water Torture Cell with hot water. (I'd love to see these reunited with the cell some day.) Also a file said to have belonged to Bess containing an inscribed cabinet photo of the teenage Ehrich Weiss. The photo was sent to a relative in Budapest who gave it back to the adult Houdini during his visit in 1901. 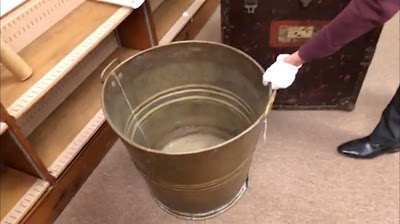 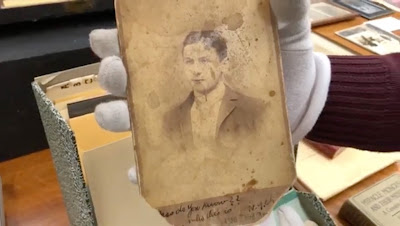 The American Museum of Magic of located in Marshall, Michigan. The museum is currently open by appointment only. Visit their website for more info.
UPDATE: David Haversat, who certainly knows a thing or two about Houdini posters, provides the following:

This lithograph is not actually printed on cloth. This is a very early preservation of the poster being mounted on a cloth material. It’s much thinner than the linen used today. Depending how they adhered the poster to the material, the poster can appear to become part of the cloth. Some old time preservation materials included an item called Chartex, it utilized heat to bond the poster the this type of gauze. It’s a terrible material in today’s standards, but worked back then.

There have been recent reproductions of the King of Cards printed on “oil cloth” or silk material on eBay. Those are reproductions. The one in the Lund Museum is authentic, and mounted to old preservation material.

Thank you David!
Related:
Written by John Cox at 7:11 AM