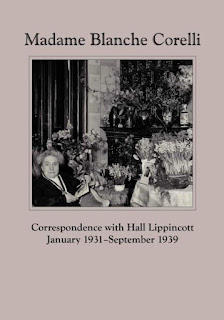 Those interested in Houdini's extended family will be interested in the new book, Madame Blanche Corelli: Correspondence with Hall Lippincott January 1931–September 1939 by Cindy Lippincott.
Blanche Corelli (real name Maria Dorothea Herrmann) was the only child of Compars Herrmann of the famous Herrmann magic family. She was also related to Houdini via his father's first marriage (Mayer Samuel's first wife was a first cousin to Blanche's mother, Rosa Csillag.) Like her mother, Blanche had a successful career as an opera singer. She later became a music teacher in Germany.
The book contains correspondence between Blanche and the author's father, Hall Lippincott. While the focuses here is on Blanche's later years in Berlin, the introduction does mention her Houdini connection with a nod to Dean Carnegie's groundbreaking 2011 post at The Magic Detective. Unfortunately, Blanche only makes a few passing mentions of her famous cousin in the letters themselves.
I own a copy of A Magician Among the Spirits that Houdini inscribed to Blanche in 1924. She in turn gave it to Dante in 1939. So I'm excited to add this book to my shelf.
You can add Madame Blanche Corelli to your shelf via Amazon.com and Amazon.co.uk.