Houdini and The Master Mystery at Clune's

While Houdini was filming The Grim Game in Hollywood in the summer of 1919, his serial The Master Mystery began playing at Clune's Broadway Theater in downtown Los Angeles. Over the course of five months Clune's showed all 15 episodes paired with a different feature attraction. Here's the ad for opening week. 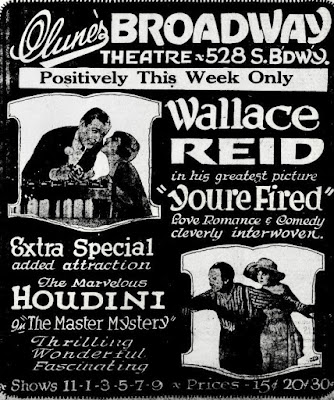 On Wednesday, June 25th, Houdini made a personal appearance at Clune's during the 9:30 show, as reported in the Los Angeles Evening Herald. 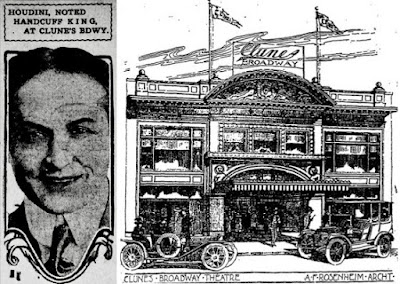 Houdini, the famous “Handcuff King” whose thrilling serial of romance, mystery and intrigue, "The Master Mystery,” is at Clune's Broadway, will make a personal appearance at the theater Wednesday evening at the 9:30 show, following immediately at the conclusion of the first thrilling episode in which he makes his screen debut. The Houdini feature augments the regular film attraction at Clune’s Broadway which this week will be Wallace Reid in “You’re Fired.”


Clune's was located at 528 S. Broadway, just down the street from the Los Angeles Orpheum Theater where Houdini headlined in 1915 and 1923. Clune's opened in 1910 and was state of the art. It became famous for the large electric sign that stood on its roof. It was renamed the Cameo Theatre in 1924. Later operators included Fox West Coast, Pacific, and Metropolitan. It closed as a theater in 1991.

Today the building still stands and is still recognizable. It's now occupied by retailers. But according to the excellent Los Angeles Theaters blog, the auditorium and screen still survive in the back. Here's hoping one day it might be restored and reopen as a theater. 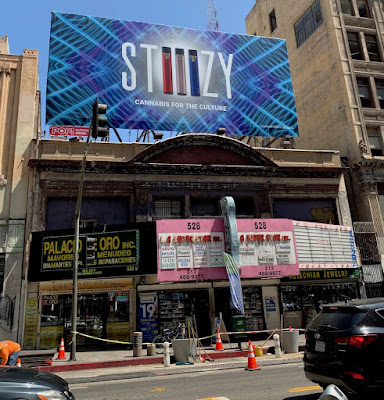 Below are all the features that Clune's paired with The Master Mystery during its 1919 run:

You can read more about the history of Clune's at Los Angeles Theaters.

UPDATE: I found Clune's review of The Master Mystery performance in the Exhibitors Herald.