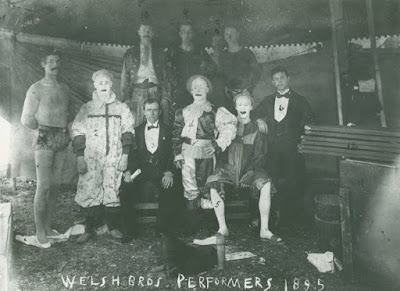 This photo above recently sold in auction as part of a lot of 26 reprint photos used in the production of Doug Henning's Houdini His Legend and His Magic. It shows Houdini (#6) standing amid the troopers of the Welsh Bros. Circus. It's an uncommon shot, and certainly one of the earliest photos of the professional Houdini. But where is Bess in this photo? I've always wondered if maybe she is the short clown standing out front with her hand on her hip.

In the Henning book the writing at the bottom is cropped off, so it's nice to get confirmation that this photo is from 1895, which makes this from Houdini's first tour with the Welsh Bros. Circus. Harry and Bess traveled with the circus troop twice; first in 1895 and again in 1898. Of this first engagement, Houdini later wrote:

In 1895, I was engaged by the Welsh Brothers' Circus which traveled almost exclusively through the State of Pennsylvania, and for the services of Mrs. Houdini and myself I received the sum of $20 weekly, railroad fares and board.

The amount was small, but I still look back with pleasure upon the season's work as being one in which we had an abundance of clothes to wear and good food to eat, for the Welsh Brothers certainly fed their artists extra well.


This photo pre-dates the more wildly reproduced troop photo that can be seen below. Houdini himself dates this photo as 1896, but I've always suspected it's actually from his second 1898 tour as the troop is much larger and Houdini looks older and closer to his "Handcuff King" image. Here Bessie is curiously costumed in a Little Lord Fauntleroy suit.


Last year an original poster for The Houdinis - Metamorphosis with a Welsh Bros circus header surfaced in France. King of Cards posters can also be found with the circus troop header. All wonderful and rare mementos of the time Houdini (and Bess) joined the circus. 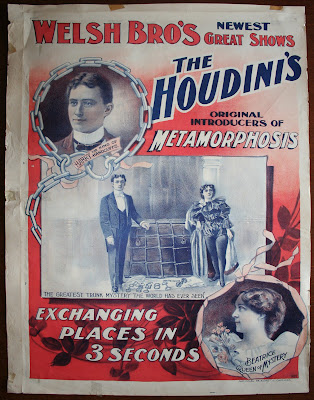