When the Welsh Bros. came to town 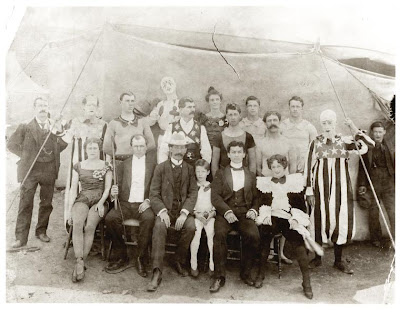 Sally Costik, curator of the Bradford Landmark Society, has uncovered two clippings from a local newspaper about the Welsh Bros. Circus playing in the town of Bradford, PA (home of the Zippo lighter) in 1898. This was during Harry and Bess's second tour with the circus troop and these clippings give a wonderful snapshot of the circus and its performers.

The Welsh Brothers railroad shows arrived in Bradford yesterday via the Erie Railroad. The tents are erected on the Island show grounds, where two performances will be given today and tomorrow. The show has just finished a successful tour of the principal towns along the Erie railroad, including Binghamton, Corning, Elmira, Olean, Hornellsville, and Salamanca, and all of the daily papers speak in glowing terms of their performances. An attractive street parade will be made at noon today by the excellent military band associated with the show. The opening exhibition will begin promptly at 2 o'clcok this afternoon. The Hornellsville, NY Daily Tribune says "Of all the show itself, nothing can be said but in words of praise. Not a thing was done or a word spoken to shock the sensibilities of the most fastidious. Everything neat and clean, the performers the best in their respective liens, the orchestra and band excellent, and every attach polite and courteous. All this can be truthfully said of the Welsh Brother Circus.

The Welsh Brothers Circus gave two exhibitions yesterday on the Pine Street grounds which were well attended by both young and old. The Akimoto royal Japanese troupe made quite a hit with the crowd. The Forepaugh sisters, M'lle Zauva, Weitzel and Bard, Lowrey and Jenkins, the great Vellier, Leon Mason, Harry F. West, Pearl Forpaough, Little Peek-a-Boo, Harry and Beatrice Houdini and Prof. J. E. Burtine, are all remarkable people in their respective lines and on a par with any in the country. Today will end the performances, afternoon and evening.


It's great to get a list of the other Welsh Bros. performers here and their acts. But how ironic that the second to last person mentioned in the article -- whose act didn't even warrant a mention -- would in just two years time become one of the most famous performers in history.

Thank you Sally for sharing with us this wonderful piece of Bradford history.