Houdini in the Cahuenga alley 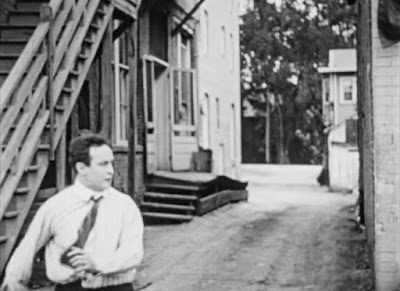 One of the best sequences in The Grim Game is Houdini's suspended straitjacket escape and fall from a seven-story building. After he's saved by an awning, Houdini is seen dashing down a narrow street to freedom. It's the last shot before the fade out on the sequence.

Turns out there is a lot of history in this shot! Thanks to the amazing detective work of John Bengtson (Silent Locations), we now know Houdini is running down what is known as the East Cahuenga alley off Cahuenga Blvd. just south of Hollywood Blvd. Best of all, the alley is still there! This is one of the few remaining Grim Game filming locations where you can still walk (or run) in Houdini's footsteps.

Here's a photo I took last Sunday. The Jerk House sign, advertising a restaurant in the middle of the alley, is a recent addition. 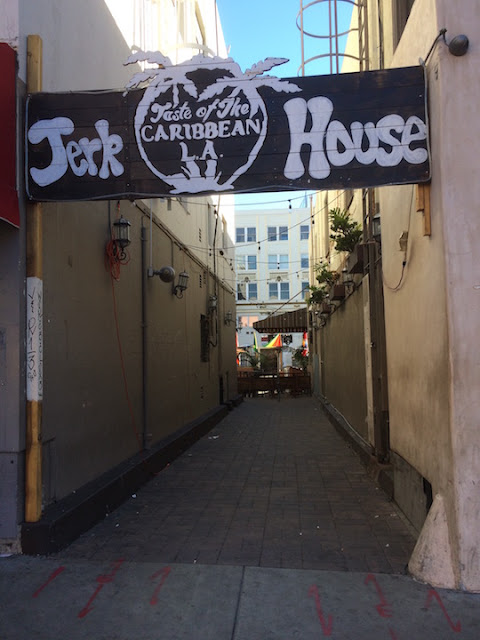 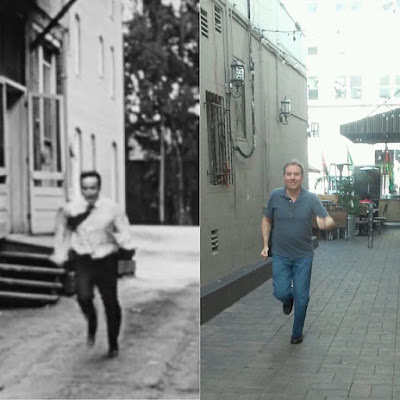 The Cahuenga alley appears in several classic silent films, including Charlie Chaplin's The Kid (1921) and Harold Lloyd's Safety Last (1923). Buster Keaton also shot a famous stunt in front of the alleyway in Cops (1920). In the photo from Cops below you can see the construction of the Palmer Building behind the alley on Cosmo Street. That building still stands and is easily identifiable today. 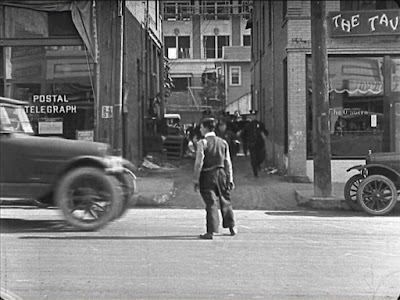 In the script for The Grim Game, Houdini was supposed to scale a high wall to escape the asylum. Publicity photos of Houdini on the wall exist, but the scene is not in the final film. Instead, this shot of Houdini dashing down the alley and emerging onto Cahuenga boulevard was used to conclude the sequence.

This is pure speculation, but when the wall climbing sequence was either cut or abandoned, could this have been a quick pickup shot to fill the gap? The Cahuenga alley is not far from the location of the Famous Players-Lasky studio at Selma and Vine where The Grim Game was made.

You can read more about the history of the Cahuenga alley at John Bengtson's site: The Kid – Cops – Safety Last! Three comic masterpieces filmed at a common Hollywood alley you can still visit today. John says, "I can think of no Hollywood exterior that plays a greater role in silent movie history than this unique alleyway."