Over the Moon...Gone: The Vanishing Act of Bess Houdini

With Bess Houdini's birthday on the horizon, what better way to mark her 146th than with a new chapbook of poetry devoted to the magnificent Mrs. Houdini. Below is the description of Over the Moon...Gone: The Vanishing Act of Bess Houdini By Jan Zlotnik Schmidt. 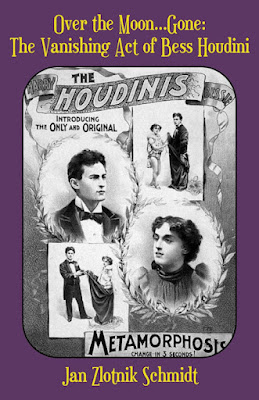 Wilhelmina Beatrice Rahner, or Bess Houdini, was born on January 23, 1876 in Brooklyn, New York. Bess met Harry Houdini when she was performing as part of a song and dance act, entitled The Floral Sisters, in Coney Island. After a short courtship of several weeks, they married on June 22, 1894 and began performing magic acts, seances, mentalist acts, and their most famous trick—the Metamorphosis--at circuses, dime museums, and vaudeville halls across the country. By 1899, Harry concentrated on his escape acts, and throughout the rest of his career, became famous for breaking out of jails, cells, trunks, and straitjackets among other feats of daring and conjuring. The more famous Houdini became, the more Bess faded into the background. After Houdini’s unexpected death from a burst appendix and peritonitis on Halloween, 1926, for ten years, Bess held seances, hoping to make contact with the spirit of her dead husband. Bess Houdini died on February 11, 1943.

CRITICAL ACCLAIM FOR THE VOLUME:

"Jan Zlotnik Schmidt has brought her own conjuring trick to readers. This insightful and moving collection reincarnates the spirit of Bess Houdini, bringing forth her emotional life through narrative and fictional auto-biographical poems, placing her husband, “The Great” Harry Houdini in the background. Not only a vibrant poetry collection, this work becomes a feminist document of a woman whose voice must be heard. Bess Houdini lives in these mesmerizing poems!" -Laurence Carr, publisher, Lightwoodpress.com, and author of Paradise Loft

You can purchase Over the Moon...Gone: The Vanishing Act of Bess Houdini By Jan Zlotnik Schmidt at Palooka Press.