Pulling Houdini's ear at the Rialto 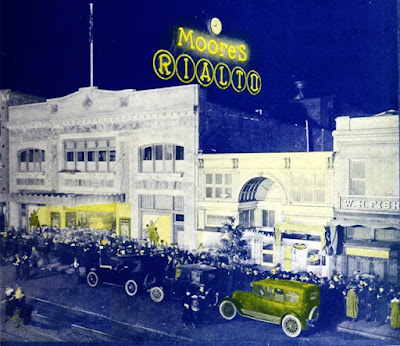 Here's a gem of an eyewitness account of Houdini at the Rialto theater in Washington, D.C. in August 1922. This engagement also marks a significant moment in Houdini history, but I'll come back that after the story.
The Rialto was a movie theater and Houdini was there making a personal appearance with The Man From Beyond. But unlike the movie's similar run at the Times Square Theater in New York in which Houdini performed magic, for this Washington engagement he demonstrated spiritualist trickery. These were his first public lectures on the subject and the debut of Houdini the ghostbuster.
This also means the intrepid Betty Whitfied had to sit through two showings of The Man From Beyond to see Houdini a second time. A Houdini nut indeed!
But not all audience members found his demonstrations as entertaining, as can be read below:
Hey, at least he liked the movie!
Built in 1918, Moore's Rialto was located at 713 Ninth Street NW. In 1925 it was taken over by the Universal Picture chain who operated it until 1927. It was demolished in 1940.
Below is the site of the Rialto today, where Houdini first entertained and inflamed with his spirit busting.
Images: Newspapers.com
Related:
Written by John Cox at 7:39 AM