Scholastic counts Houdini among the daredevils

Houdini makes the cover of Scholastic's 2019 release, Top 20 Daredevils: Countdown to Danger by Melvin Berger and Gilda Berger with illustrations by Berat Pekmezci. And what number does Houdini come in at? You'll have to get the book to find out! 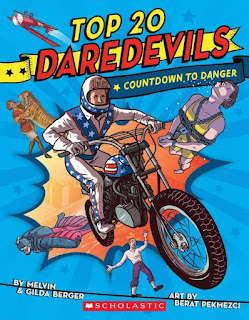 From swallowing a cup full of needles to tightrope-walking across the Grand Canyon, these top 20 daredevils have attempted some of the most dangerous stunts of all time!

Have you ever tried to skydive from thousands of feet in the air, or free climb a 20-story building with nothing but your bare hands? Well, these daredevils have! Read all the elaborate (and gory!) details of the most dangerous stunts of all time carried out by the 20 biggest risk takers to ever exist. Melvin and Gilda Berger deliver a thrilling introduction to each of these daredevils, including a short biography, breakdowns of that person's most death-defying stunts, jokes, and more. Readers will even learn the science behind some of these shocking feats! The countdown to number one includes legends like Harry Houdini and Bessie Coleman, as well as newer or lesser known daredevils, such as Jeb Corlis, Alain Robert, and Mabel Stark. Chockful of unbelievable facts, and a mix of action-packed comic-style illustrations and photographs, this book will keep any kid who loves cool stunts busy for hours!

This book feels like a bit of a throwback. Below are two similar titles from back in the day. Daredevils Do Amazing Things (1978) with magnificent Houdini illustrations by Ivan Powell. The Hayes Book of Daring Deeds (1986) with a terrific Houdini-Grim Game cover. 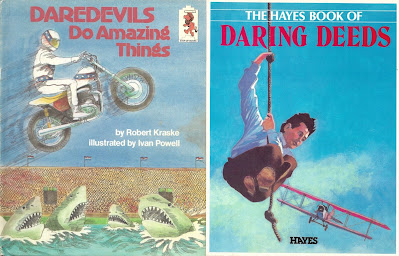 You can buy Top 20 Daredevils: Countdown to Danger at Amazon.com and Amazon.co.uk.