To celebrate Bess Houdini's 146th birthday today, here are some excerpts from terrific interesting article by Sally MacDougall called "What Magicians' Wives Think of MAGIC". This appeared in The Tacoma Daily Ledger on July 29, 1928. 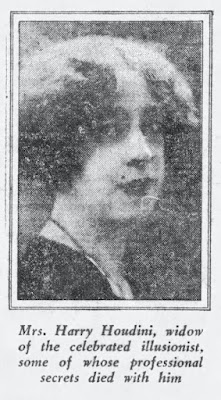 "My husband thought I was clever, and you don't suppose I was going to disillusionize him," Mrs. Houdini said. "He never told me how to do a trick. He expected me to use my wits and find out for myself. I wouldn't have asked him to explain, not for anything in the world. That would've spoiled something for both of us. In the first sentence I ever spoke to him I told him I thought he was wonderful, and that seemed to surprise him and make him happy. I still think he was wonderful."
Houdini's celebrated milkcan trick kept his wife puzzle for weeks, although she watched it carefully night after night and really trying to understand it. The contraption looked at her like an ordinary milkcan, and her heart would be clutched with fear every time she saw the thing being filled with water, her husband closed in and the six strong staples on the cover being locked with padlocks.
"I have been a shame to let him know that it had me mystified," she said. "I watched him, noticed little things he always did. He had a very clever way of covering the trick. I got to know a certain twinkle in his eyes in connection with some secret one mustn't ask about. When he was not around I gave that can a very thorough examination. After that I kept on pretending I had known all the time. It was a simple trick, not easy to detect. The simplest ones are always the best."

Later in the article comes this intriguing nugget:

In the weeks before he died the Houdinis were working on a new and sensational trick for the following season. Mrs. Houdini understood the work and the mechanism up to the point where it is necessary for the performer to escape. Houdini had worked on it for years and he finally solved what he anticipated as the greatest escape of his life. His wife supposed there would be plenty of time to study and learn the escape details. But the secret died with Houdini. In the past year she and some magicians have worked at it day after day, but on the morning she talked with me in her home they saw no glimmer of a solution.

What might this be? Buried Alive? Frozen in ice? The near perfect mystery?
The article continues with Bess remembering their marriage in Coney Island (the acid on the dress fable). Then comes this delight:

Every year since then if the Houdini's were anywhere near New York they spent June 22 celebrating at Coney Island, going through the old program–looping the loop, doing all the stunts and finally getting their pictures taken. The photographer never failed to be taken in by a certain ritual.
"We've just been married. Could you take our picture?" an embarrassed man would say. As souvenirs of these anniversaries Mrs. Houdini has an album of bride-and-groom photographs, the last one taken two years ago, the bridegroom standing, his hat poised in one hand, the other hand on his wife's shoulder.
"We lived in an element of surprise and mystery and we had so much fun," Mrs. Houdini said. "He would talk to craziest nonsense over the telephone, pretend he didn't know me, make a date to meet me. Perhaps we go for dinner to some roadhouse and we'd keep on acting in a manner that would've surprised the other dancers if they had known that we were married before they were born."

The article circles back to the topic of secrets and concludes with the following:

Mrs. Houdini intimated that one might as well realize that one never knows what the other is hiding, and then perhaps it is as well not to know. She did not know until after her husband's death that several women, one a widow whom she considered a very dear friend, had been writing love letters to Houdini. She found them in a file, with carbon copies of her husband's replies. There was no word in these answers to make any wife less happy. Still, Mrs. Houdini wishes he hadn't kept that secret from her. The letters were, of course, returned to the sender's for safekeeping. But it could have been possible to have sent them back sooner!

I think we can assume the "widow whom she considered a very dear friend" was Charmian London. While Houdini's brief fling with the widow of Jack London wasn't uncovered until 1996 (by Ken Silverman in Houdini!!! The Career of Ehrich Weiss), it's interesting that this major clue was dropped by Bess as early as 1928. But enough about that home-wrecker. This is Bessie's day, so...
HAPPY BIRTHDAY BESS!