The mystery of "Scotch May" 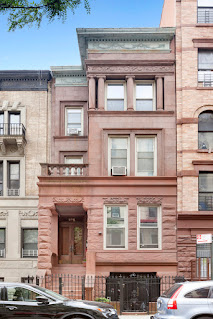 In the 1969 biography Houdini The Untold Story, author Milbourne Christopher relates a curious story from the Houdinis home life. He writes:

The star of The Master Mystery was confronted by a minor mys­tery in his own home. When Houdini was in Scotland, Bess had hired a maid, Bethel May Dove, and brought her back with them to New York. Bethel May was a conscientious worker and seemed to enjoy her work in the Houdini household. She was twenty-one and almost a part of the family. One night Bess went to Bethel May’s room to give the girl her instructions for the next day. Ten minutes later Bess passed the door again and noticed that it was open. She walked back, looked in. Miss Dove was gone; so were her clothes and her wardrobe trunk. Harry told the police he thought she might have run away to marry a soldier. He knew exactly how his elephant disappeared, but the vanishing Dove baffled him.

I don't know Christopher's source for this [see UPDATE], but Houdini confirmed the maid's existence in a letter he wrote in June 1919 to a Mr. DeVega in Glasgow. The letter is in the collection of Edwin A. Dawes and in it Houdini writes:

Our Glasgow maid ran away with a soldier, and hope she has been lucky in her choice.
You know we took a scotch girl along to America. Such is life.

The missing maid doesn't get much of a mention in any other biography and she has pretty much slipped into obscurity. "Such is life" indeed. But now the case may be reopened as we might have finally found the missing maid...and more!
The current issue of Marco Pusterla's Ye Olde Magic Mag contains a fascinating article about a Scottish woman named Evelyn Kaye who claimed the Houdinis were her guardians for seven and a half years. The source is an undated article from a Glasgow newspaper (Marco speculates it was probably from around 1950). The article makes quite a few mistakes, such as saying Houdini died in 1934, but Evelyn's tale is intriguing. Here's an excerpt: 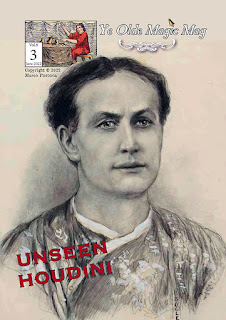 Mrs. Kaye comes of a theatrical family. Her mother, known as Jessie Crawford, was an actress in old-time melodramas at the Princess's Theater in the days of Richard Walden.
When Houdini first came to Glasgow to perform at the Coliseum music hall in 1912, he and his wife and secretary lodged with the family in Abbotsford Place.
They became great friends. Two years later when the Houdinis were going to America it was agreed that they should take Jessie Crawford's delicate 12-year-old daughter with them for her health's sake.
A year later her mother died and the child was left under the guardianship of Houdini who later made her his dresser and co-assistant with Mrs. Houdini in a number of his illusions. They always called her "Scotch May."

The article goes on to say that the one-time "Scotch May" knew the methods of Houdini's Vanishing Elephant and Walking Through a Brick Wall, but that she would never reveal Houdini's secrets. It also says she married a Glasgow optician, but was now widowed. Interestingly, she had reached out to magician Robert Harbin, who was performing at Glasgow's Pavilion Theater, and knowing Houdini had a magician brother named Hardeen, asked Harbin if he was also related to Houdini. Harbin introduced her to a newspaper reporter and that is how this article came to be.
It was our friend and long time reader Leo Hevia who made the connection to the story in Christopher. So could Evelyn Kaye be the missing maid?
There are some discrepancies. Houdini was not in Scotland in 1912. But he was there in 1913. The two women have different names, but "May" is common between them and Kaye is likely a married name. We see in the DeVega letter that she came from Glasgow, but the letter can also be read as if Houdini is talking about two different women. And the math doesn't quite work as Christopher says the maid was 21, but the newspaper account would make her closer to 18-19 at the time of her vanishing act. But none of this is fatal to the case and more fits together than not, so I think it's very likely Bethel May, Evelyn Kaye and "Scotch May" are the same person.
This opens the door to a few possibilities. On occasion, Bess would talk about having a daughter. I've always thought that was bizarre, but perhaps Bess is talking about May who is, essentially, an adopted daughter. It also may be time to re-check post 1914 photos and see if we can catch a glimpse of Scotch May herself.
Finally, if we've discovered a new member of Houdini's household, is she able to provide any fresh insight? Well, she does, and it's a bit of a bombshell! Regarding Houdini as a person, the original article reads.

He didn't drink or smoke, Mrs. Kaye tells me, and he worked indefatigably, often taking two years to perfect a single illusion. He taught himself 12 languages, and towards the end of his life was going blind, like his mother, his sister and his brother, an X-ray research doctor.

So here we have yet another mention of Houdini's faulty eyesight. But going blind? And his mother blind??? This is first time I've ever heard that. But the mention of his sister and brother's blindness is correct. Also, this article ran while Leopold was still alive, so knowledge of his blindness, which came on later in his life, just bolsters Evelyn's insider credentials.
So maybe she revealed a Houdini secret after-all?
A big thank you to Leo Hevia for his research. To Marco Pusterla of Ye Olde Magic Mag for permission to quote the original article. And to Edwin A. Dawes for showing me the original Houdini maid letter.
UPDATE: Our friend Marco Pusterla has discovered that Milbourne Christopher's source for the maid story was the November 15, 1918 issue of The Sphinx. This puts the disappearance around that time. The article also confirms that Bethel May came with the Houdinis from Scotland "six years ago", which also generally matches Evelyn's account. So just more evidence that Evelyn and Bethel are one in the same. Thanks Marco!