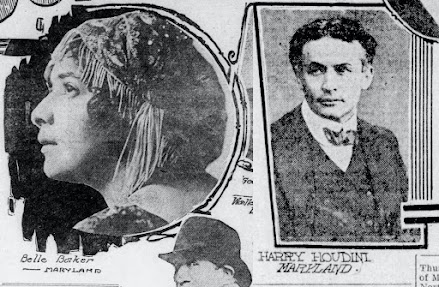 Last week I posted the story of Houdini and Don the Talking Dog. Today I have a new tale of Houdini and a rascally fellow vaudevillian. This time its singer Belle Baker who shared the bill with Houdini at the Maryland Theater in Baltimore during the week of February 5, 1912.
Baker was known to employe the practice of "clacque." This means hiring audience members to provide an inordinate amount of enthusiasm and applause during your act. During her run at Hammerstein's in 1911, Variety called this out, writing: "Miss Baker did nothing with her voice, expression or gestures to merit this kind of applause. She became exceedingly painful in her labored efforts during the Italian selection. Miss Baker was one of the first in New York vaudeville to use a "clacque", and she soared for a while until vaudeville "got on.""
Here Variety is once again calling her out for the practice, but this time the situation ensnared Houdini.
This was certainly embarrassing for all, but it does sound like Houdini took it in stride. I do love the idea of him standing "still for two minutes until the noise subsided." And despite her sneaky ways (or maybe because of them), Baker would go on to have a long and successful stage, film, and radio career. She died in 1957 at age 63.
Here's another fun detail about this engagement. Notice that "Mr. and Mrs. Erwin Connelly" are also on the bill this week. This is actually Jane Connelly, Houdini's future co-star in The Man From Beyond, and her husband Erwin who also appeared in the film. Do you think when they were on set they reminisced about the time Belle Baker gave Harry the clacque?