The talk of Chicago 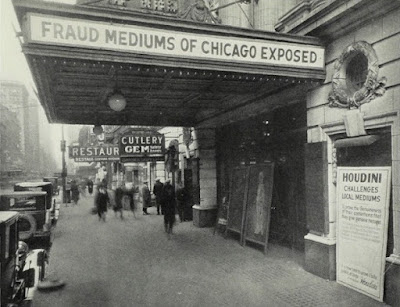 Here's one last post about Houdini at the Shubert Princess Theatre in Chicago in 1926. This 8-week run was longest single theater engagement for the 3 Shows in One and would prove to be Houdini's last appearance in the Windy City. Today I thought I'd share a collection of newspaper ads from the Chicago Tribune that pitched Houdini's show over the course of that record run.
This first ad from Match 4, 1926, shows the comedy play Young Blood with Helen Hayes preceding Houdini at the Princess. The Houdini show was playing the Bronx Theater in New York this week. Houdini flew by airplane to Chicago on March 7th.
Here's an ad for Houdini's opening night on Monday, March 8. You can bet he made sure the theater was ready, even if he had to do it himself!

By the second week Houdini was "the talk of Chicago." I can believe it!
Wonderful caricature artwork features on this ad for the start of Houdini's third week. If you've ever wondered what tickets cost back then, here you can see "600 Seats at $1 and $1.50 every night."

More nice artwork for the start of Houdini's fourth week. "Have Houdini Give Your Friends a Spirit Message." I'm surprised spiritualism isn't played up more in these adverts.
The famously prophetic Halloween artwork features on this fifth week ad. "Give yourself a treat. Bring the kiddies!" Any of those kiddies still around, I wonder?

For his final week Houdini brought back some of his tried and true challenge escapes.
Houdini's final two shows were on May 1st. He then traveled on to the Goodyear Theater in Akron, Ohio. Actress Eva Le Gallienne moved into the Princess with two Ibsen plays, The Master Builder and John Gabriel Borkman. Doesn't sound nearly as fun.

The Chicago Princess Theatre was located at 319 S. Clark Street. It converted to a movie theater at the end of the 1920s and closed in 1937. In 1941 the building was razed to make way for a parking lot. The Metcalfe Federal Building now stands on the site.
But let's not forget Houdini was here...for eight full weeks!
Clippings: Newspapers.com.
Top photo: Houdini His Life Story by Harold Kellock.
Related:
Written by John Cox at 10:26 AM