Let's return to the front of the Princess Theater in Chicago with another terrific image from the collection of the McCord Museum. This captures a sidewalk stand advertising a very special week during Houdini's record 8-week run at the Princess in 1926.
The confession of acclaimed trumpet medium Annie M. Benninghofen was a major coup for Houdini and a real blow against spiritualism. On April 15, 1926, Houdini held a press conference at the Hotel Sherman in Chicago with Benninghofen who admitted that she had practiced fraud for 30 years. Houdini and the medium then gave a demonstration seance for the gathered reporters exposing her techniques. 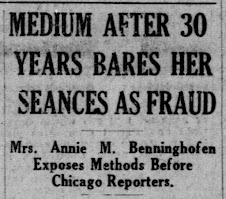 "My father was a spiritualist. He was devout in his belief," explained Mrs. Benninghofen. "He was an educated man, but he was duped just like all the others. Although I now admit the work I did was a fraud, I must say that at the time I was sincere. I really believed I was helping the spirits. But I never fooled my mother. And on her deathbed, she asked me to give it up. I refused, but I got to thinking about it, and finally I quit."
Houdini added, "They are all just alike. I have yet to meet a real medium. Mrs. Benninghofen is the greatest of all of them I have met, and she admits that her work was a fraud."
Mrs. Benninghofen appeared with Houdini onstage during his 3 Shows in One on the evening of April 16. Houdini then featured her as part of his show for the entire following week (April 19-25). That's the week we see advertised above. I love that it promotes it as "The Greatest Sensation Since the Confession of the Fox Sisters!" Also notice the mention of Cecil Cook. Houdini had busted her a year earlier.
Houdini and Mrs. Benninghofen took a series of photos together at the Butler studio in Chicago. You can see several of those photos affixed to the sidewalk stand. Below is another less common photo from the McCord collection.
When Mrs. Benninghofen completed her week with Houdini at the Princess, she gave him her spirit trumpet along with sworn statement that it was used for fraud. Today there are several Houdini owned spirit trumpets in private collections, but I'm not sure which is the famous Benninghofen trumpet. If anyone has any info on that, I'd love to hear it.
Thanks to the McCord Museum for helping unlock these stories with their magnificent images.
UPDATE: Brandon Hodge of The Mysterious Planchette has come forward with what he believes to be the Benninghofen trumpet, and I think he's right! Brandon writes:

I know lots of folks make big claims about Houdini items, but I have long suspected I own the Benninghofen trumpet. I have two trumpets acquired from the Dunninger estate (which had many Houdini-associated items), and one is not only the same configuration as the Benninghofen trumpet (the fully rolled bell-edge is a rare feature on historical trumpets), but has the same slightly darker/mis-matched pieces. 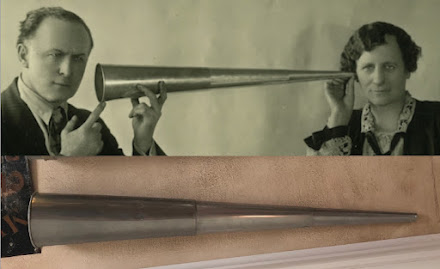