To mark Harry and Bess's 128th wedding anniversary today, here's a rarity from the McCord Museum. As I've noted in a few posts, the McCord is celebrating their own 100th anniversary by offering images from their collection free of use.
The below is from their Houdini holdings and might seem innocuous at first. I don't even think this is Houdini's handwriting. But the date tells us this is something very special.
This appears to be a tag that accompanied flowers or some other gift from Houdini to Bess on their Silver Anniversary on June 22, 1919. The Houdinis celebrated the day with a gala dinner at the Hotel Alexandra in Los Angeles. The hotel and ballroom still exist. I had a visit in 2019. 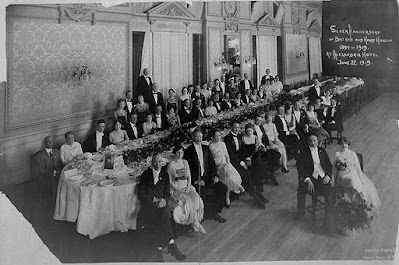 Here's wishing Harry and Bess a happy 128th. I'm not sure what metal that would be, but it would need to be a rare one!