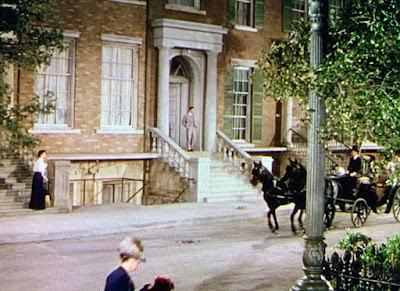 Recently my buddy and former co-worker Sterling Silva altered me to the possibility that the exterior of Houdini's house from the 1953 Houdini biopic starring Tony Curtis still stands on the Paramount backlot. Yesterday I joined him for lunch and a little studio exploration and, sure enough, the block of homes as seen in the movie is still there! 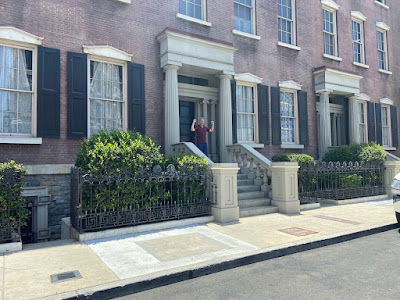 Known as Washington Square, the block consists of five "upscale Georgian style facades". There have been cosmetic changes over the past 70 years, but it's all still very recognizable. Three of the facades match the film. Try as we might, we couldn't establish conclusively which of the three was the house. But the one I'm standing in in the above pic seemed to line up in our camera lens the best. And if you're wondering what the inside looks like, here you go. A little less square footage than the real thing, but that's movie magic for you! In the movie the filmmakers elected to renumber the house as 273 W. 113th Street (as opposed to the real 278). This can be spotted on an invitation that immediately precedes this shot. The house interiors were shot on a Paramount soundstage along with the rest of the film. One day I hope to identify exactly which stages were used in the production. Paramount now lists on the outside of their stages which famous movies were made within, so it would be great to see Houdini (1953) added to one of those historic markers.
Our exploration also turned up a couple other Houdini connections. Adolph Zukor and Jesse Laksy both have buildings names after them. A large bust of Zukor sits in the lobby of his building. These men worked with the real Houdini to produce his two Paramount movies, The Grim Game (1919) and Terror Island (1920). Although Zukor may have ghosted Houdini when it came to the possibility of a third. 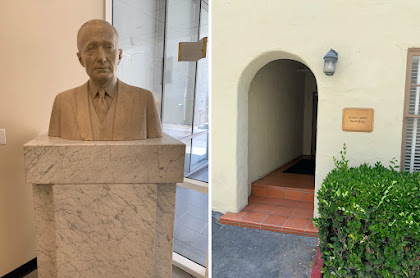 Unfortunately, the real Houdini never walked on the existing Paramount lot. His two films were shot at the now long gone Famous Players-Lasky studio in Hollywood. But Bess did! I didn't snap any pics of that spot on this visit, but I thought of her as we walked that same path.
Believe it or not, this is now the second standing 278 in Hollywood. The brownstone facade used in The Great Houdinis also still stands on the Fox Studio Lot in Century City.
What a joy to discover this piece of Houdini (1953) history is still around and is still in use. Paramount does offer studio tours, so you can always check it out for yourself.
Thank you Sterling! 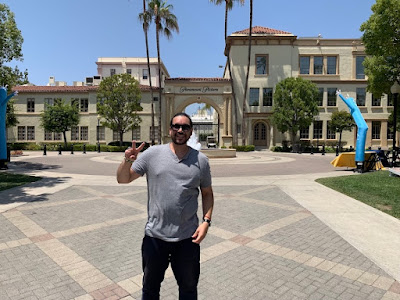