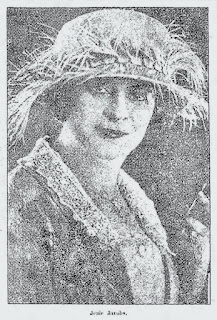 We all know about Martin Beck's involvement in managing Houdini's early career. We also know about Harry Day who booked Houdini on his UK tours. But I recently discovered there was another agent in Houdini's life: Jenie Jacobs.

Jacobs has an interesting story herself. She grew up in a Syracuse orphanage and was "cast adrift" at age 13. She came to New York and worked her way through law school at New York University while learning stenography at night. She then entered the agency business and in time distinguished herself as one of only two female booking agents in the business (the other was in Russia). She lived with her life-long partner Pauline Cook of the vaudeville sharp-shooting team "Cook and Clinton." The two later formed their own agency.

It not clear exactly when Jacobs first entered Houdini's orbit, but to hear her tell it, it was early in his career. In a syndicated 1922 profile ("A Creator of Footlight Careers") she claimed to be responsible for Houdini's high salary. Her story doesn't quite comport with known facts, but you gotta love her last line, as I'm sure Houdini did. 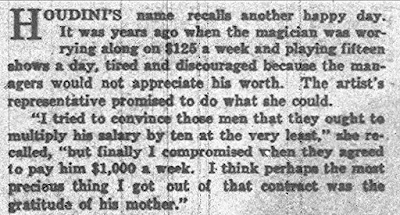 It's more likely Jacobs represented Houdini after his return to the U.S. in 1905. She definitely represented Hardeen when he returned in 1907. Her name is featured prominently on Hardeen's trade advertisements, referring to her as "Miss Jenie Jacobs, The Hustling Agent." She also represented Houdini's boyhood friend and one-time Houdini Brother Joe Hayman. Joe played Vaudeville with Mildred Franklin as "Hayman and Franklin." Another familiar client was Dr. Walford Bodie, "The Famous Bloodless Surgeon and Electric Wizard." 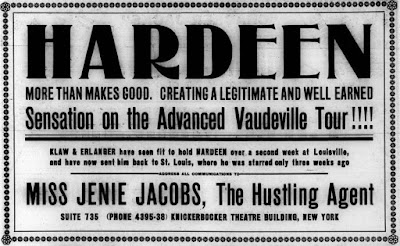 Jacobs relationship with Houdini appears to have soured, and in 1908 she sued the magician for $2,250 in commissions owed.


It may be a testament to her skills of persuasion that she was able to reconcile with Houdini a few years later and once again act as his agent.*


It speaks well of Houdini and Hardeen that in this male dominated age they entrusted their careers to a woman (and an apparent gay woman at that). But it's clear Jacobs had no problems asserting herself in a "mans world." She offered this advice to women:

"[This] is the particular warning I would like to hold up to women: not to let their own timidity and men's boldness bluff them into feeling that they are unable to carry on business on their own account. We must bluff a little too and keep awake."


In 1921 Jacobs launched a successful career as a theatrical producer, clocking several hits on Broadway. She also sued the all-powerful United Booking Office (UBO) for "oppression and discrimination." She continued to represent top talent, including Jack Benny, and soon branched into radio. In the 1930s she became closely affiliated with the RKO circuit. It's possible she may have again booked Hardeen at this time.

Jenie Jacobs died of cancer on February 21, 1933 at age 55. She is buried in Cypress Hills Cemetery in Brooklyn.

* UPDATE: I've since learned that Houdini and Jacobs settled their lawsuit for $1.
Related: