REVIEW: 'Houdini Speaks to the Living' at The Players

On Halloween The Hidden Room performed Houdini Speaks to the Living at The Players in New York City. Dorothy Dietrich and Dick Brookz of the Houdini Museum in Scranton were there and provide us with this review. 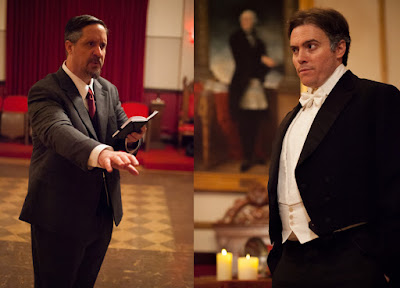 The Hidden Room and Austin’s Harry Ransom Center at The University of Texas at Austin brought their production of Houdini Speaks to the Living to the legendary Players Club in New York City for a one time only performance on October 31, 2017. Houdini Speaks to the Living is written by Beth Burns and Patrick Terry. It stars Patrick Terry as Houdini and Robert Matney as Sir Arthur Conan Doyle. It originally played at The Hidden Room Theater in Austin, Texas, in October of last year.

We had a rare opportunity to go back in time and spend an evening with Houdini and Sir Conan Doyle. It was a brilliantly written representation of the relationship between these two iconic figures of the early 1900’s. It is 1926, and the Great Houdini is taking his crusade against Spiritualism and fake mediums to the public in a series of performance lectures filled with magic and seance-debunking. At the same time, his friend Sir Arthur Conan Doyle, author of the Sherlock Holmes mysteries, is lecturing on behalf of Spiritualism, believing it to be “a great Philosophy” that will usher in a new age for mankind. The two legends battle out their beliefs head to head in this insightful presentation. Over a year of research went into Houdini Speaks to the Living, bringing material straight from correspondence, essays, photographs, diaries, and books from the Harry Ransom Center’s Harry Houdini and Sir Arthur Conan Doyle collections. About 75% of the play are verbatim comments taken from their massive collection, which makes this presentation quite authentic. 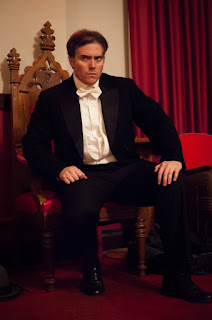 The evening starts with Houdini, played by actor-writer Patrick Terry, doing an effect that challenges the audience whether they can trust their own senses. Then Sir Arthur Conan Doyle, played by Robert Matney, begins discussing his amazing experiences with mediums. He was a true believer in the Spiritualists. He spoke of how the mediums were able to give messages to him and so how many unbelievable things happened. Such things as messages from the beyond and expressed great joy the time a table rose in the air. Houdini’s character does his best to explain that it’s all a fake, perpetrated on the grief stricken Conan Doyle. That all of the mediums so called manifestations can be done Houdini by natural means. Houdini presented many demonstrations of mediumship. He called on audience members and told them personal information about themselves that Houdini couldn’t possibly have known. He also got messages from the beyond to Houdini’s questions and audiences thoughts. Again and again Houdini was successful, but failed to convince Sir Arthur Conan Doyle. One of the things that Sir Arthur Conan Doyle was so impressed by, the table floating in mid air. Houdini grabbed a table from the side of the stage and the table rose into the air and floated for several minutes to the amazement of Sir Arthur. Houdini explained that everything Doyle witnessed were tricks.

Sir Arthur lost his son during the war which brought him to such great despair that he reached out to mediums for any kind of comfort. He explained how clear the messages were from the beyond. How these things could not be manifested by trickery. Conan Doyle became enraged as he stated that he knows what he witnessed and his belief in mediums was unchanged. He concludes Houdini himself is one of the best mediums in the world but uses his powers to do his escapes and magic. He leaves Houdini standing by himself on stage. Houdini tries to console Doyle with no luck. Houdini makes his final statement declaring that it’s impossible to communicate with the beyond. As Houdini leaves the stage a glass on the table behind him smashes which startled and puzzled the great Houdini.

The production was beautifully written, directed and staged. The story was brilliantly portrayed by two very capable actors. You leave with a very good understanding of the relationship between the two legendary characters, Houdini and Sir Arthur Conan Doyle and why their relationship was so strained. 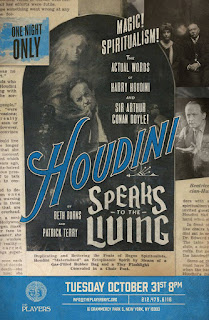 Grief for a loved one who has died and wishes that you can communicate with them can make you believe things that you otherwise wouldn’t. Houdini was so against the Spiritualists that he did all he could to expose them wherever he travelled. He also wrote a book A Magician Among The Spirits where he documents his experiences with the mediums. Houdini said in the introduction. He explains that he went into his research with an open mind and concluded...This is not a study of a few weeks or months, but one that lasted over thirty years. In that time I have not found one case that savored of the genuine. Houdini didn’t say it wasn’t possible. He said that every medium he tested turned out to be fake.

The evening was a wonderful slice of History. The direction was beautifully presented by very capable actors. The magic was perfectly woven into the story. The production will change no ones minds, skeptics and believers will go home unchanged with their beliefs intact. This became even more clear in the brief question and answer session that followed the end of the play.

We and the audience loved every bit of it and if you get the chance to see it, so will you.