Disney keeps on feeding us Hidden Houdinis. Here are two new ones from just this week. (Click images to enlarge.)
The first is found in the trailer for Hocus Pocus 2. Looks like the characters visit a magic shop and there's a Houdini poster on the wall. This is a reproduction of his "Do Spirits Return?" poster used during his second 3 Shows in One tour. Prints are widely available online.

The next one shows up in episode 4 of the Marvel series She-Hulk: Attorney at Law. You can see Houdini's 1911 Water Torture Cell poster and a 1926 Buried Alive poster on the wall of the "Mystic Castle" (a thinly disguised Magic Castle). Quite a few golden age posters in general can be glimpsed in this episode. 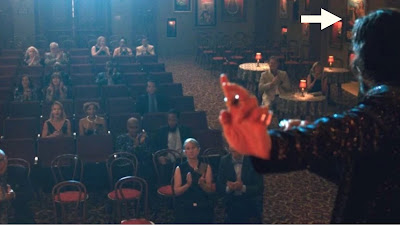 You know, I continue to hear rumors of some kind of Houdini project active inside Disney. I have no idea what this is. But, hey, I'm right down the street! Just saying...
Thanks to George Lescay for the alert.
Related:
Written by John Cox at 9:20 AM