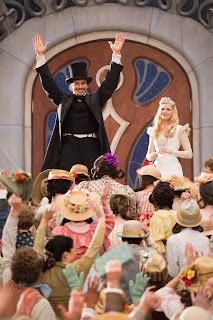 Houdini gets a few nice nods in the new movie, OZ The Great and Powerful, which is released today by Disney. The movie is a prequel to the 1939 classic The Wizard of Oz and tells the origin story of the Wizard as well as the Wicked Witch. Lance Burton is credited as the film's magic consultant.

In the early part of the film (which is in black and white and a 1:33 aspect ratio) there are two Houdini playbills on the wall of the traveling circus wagon belonging to magician Oscar Diggs a.k.a. "Oz" played by James Franco. If you have an eagle eye, you can identify the first as an advert for Houdini's short-lived Grand Magical Revue of 1914. The other playbill is actually a Hardeen advert with Hardeen's name masked off. However, Princess Yvonne's name is still visible and gives it away.


During these same opening scenes, Oscar/Franco gives Houdini himself a nice name-check when he says, "I want to be Harry Houdini and Thomas Edison all rolled into one."

Of course, Franco could have said he wants to be a combination of Harry Keller and Thomas Edison. It's said that Oz author L. Frank Baum modeled his wizard on Kellar, who was then the leading American magician of the day. But I won't deny Houdini the honor. By the way, Baum wrote his OZ novels in a house he called Ozcot, which sat very close to what is today The Magic Castle.

While maybe not a deliberate nod to Houdini, it's also worth noting that James Franco's costume bears a striking resemblance to a famous photo of Houdini. If you think I'm looking too hard, know that this same Houdini photo was used as the bases for the costume worn by Harvey Keitel in FairyTale: A True Story, so we know it's a reference photo Hollywood costumer designers have used to in the past. Just saying... 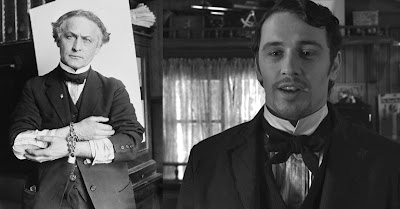 OZ The Great and Powerful co-stars Rachel Weisz as Evanora, and we all know about Rachel's Houdini connection. The magnificent score was composed by Danny Elfman who was originally hired to write the music for the upcoming Houdini Broadway musical. Finally, Mila Kunis, who plays Theodora, once starred in a movie written by a familiar Houdini enthusiast...

For the record, I really enjoyed OZ The Great and Powerful, even beyond the nods to our Harry. I hope we get more OZ adventures from the Mouse House.
Written by John Cox at 8:47 AM