Treasures of the Harry Ransom Center 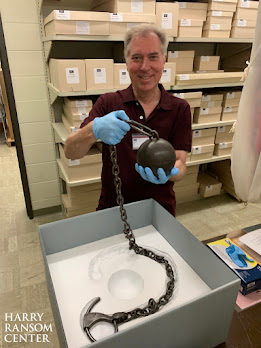 Last month I spent an incredible six days at the Harry Ransom Center at the University of Texas in Austin, which holds the largest public collection of Houdini research material in the world. Today I'm excited to share what I saw on my first day.
You might be wondering how such a large Houdini collection wound up in Texas? As I chronicled in a recent post (Exploring Houdini's Austin), in 1927 Messmore Kendall purchased the bulk of Houdini's private papers and his theatrical collection to add to his own massive collection. After Kendall's death, his entire collection was purchased by Karl Hoblitzelle for the Harry Ransom Center in 1958.
The Ransom Center also holds Houdini material from the Albert Davis and the Morris N. Young collections, and they are still making acquisitions. (Such as their famous ball and chain in 2016.) In fact, if you are looking to sell or donate a Houdini item or collection to an institution where it will be well protected and forever accessible, the Harry Ransom Center should be at the top of your list.
It's also good to say up front that anyone "with a photo ID and a sense or curiosity" can see the treasures I'm about to show. I wasn't special. The Harry Ransom Center is open to the public and their website has excellent finding aids for the Harry Houdini Papers, Harry Houdini Collection, and Magic Collection. However, the collection is massive! So massive I could not see it all in six days. But with the help of the amazing Eric Colleary, Cline Curator of Theatre & Performing Arts Collections, I saw a lot. So let's get into it! 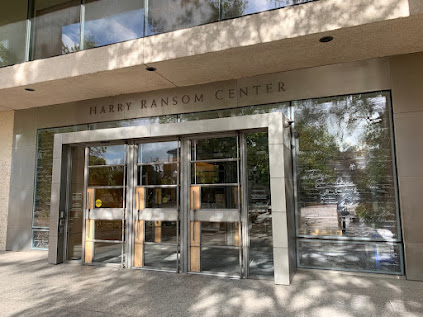 My Houdini discoveries happened before I even entered the building on that first morning (which, for the record, was August 8, 2022). Famous signatures and key holdings are etched into the building's decorative glass. Of course, I had to seek out Houdini, and I'm happy to report he is well represented. I was off to a good start. 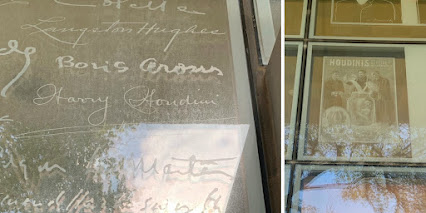 Inside I met up with the aforementioned Eric Colleary who gave me a private tour of the Center and the stacks. You know, I've always only thought of the Ransom Center just in terms of Houdini. But the Houdini collection, as big as it is, is only a very small part of their massive holdings. The Ransom Center is filled with other treasures! There's even a Gutenberg Bible on display in the lobby. I got a peek at a few unique treasures, such as Charlie Chaplin's bow-tie and Sir Arthur Conan Doyle's handwritten manuscript for A Scandal in Bohemia. 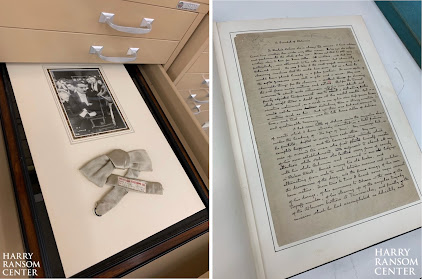 The first Houdini treasure I saw was his 1910 Aviation trophy. Eric and I had bonded over this back in 2019, so this was a perfect way to start. The plaque is larger than I thought, which was a common theme of everything I saw this day. I was also able to look very closely at the date and can report that it has not been modified as was long claimed by my pal and mentor Manny Weltman. Sorry Manny! 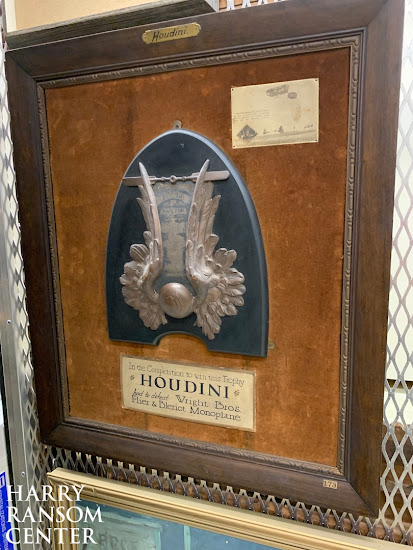 Books were not going to be a focus of my research, but the Ransom Center's got 'em! Below is Eric with Houdini's own copy of The Discoverie of Witchcraft. They also have the original receipt from Maggs Bros. in London, showing Houdini purchased the book on August 4, 1917 for £23 (marked down from £25). 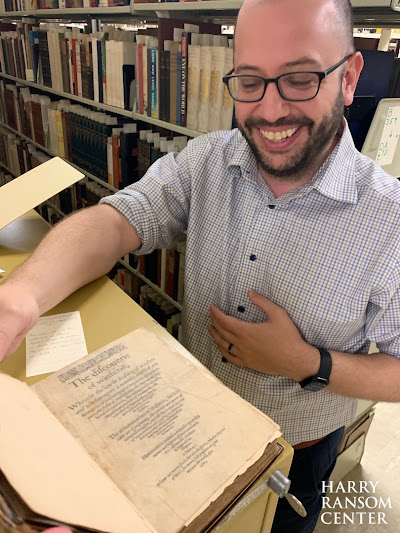 We then passed through the Preservation & Conservation Department. There I met Andrea Knowlton, Senior Book Conservator at the Harry Ransom Center. Among her current projects is Houdini's 1897 Magic Made Easy catalog. This was a treat to see, and it's great to know the Ransom Center is taking steps to ensure this mega rarity will be around forever. 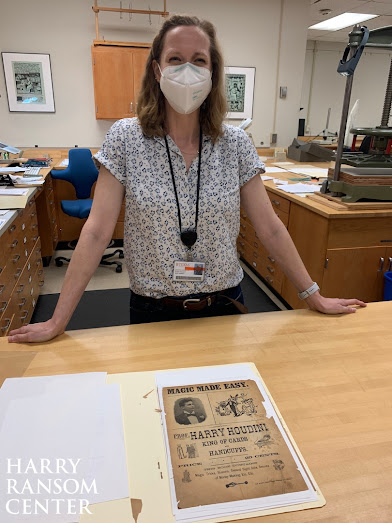 Eric and I spent a good amount of time in their oversized flat items stacks, because it's here one finds their incredible collection of Houdini posters. We started with two posters from his 1920 UK tour that I've never seen. The condition is so flawless it felt like I was time traveling. And there was more... 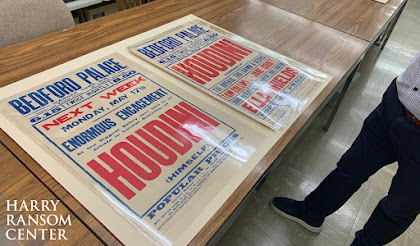 Much more! How about three 1913 playbills from Cardiff, marking the first appearance of the Water Torture Cell in England. And in case you're wondering, the Ransom Center does not sell or trade their duplicates. The collections they acquire remain intact. 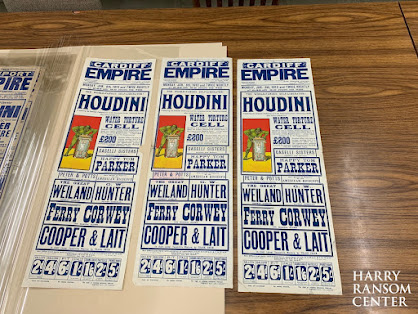 Here's one for you Mirror Handcuff fans. This newsstand poster announces the headlines for March 18, 1904, the day after the famous challenge. This is one Houdini kept himself. 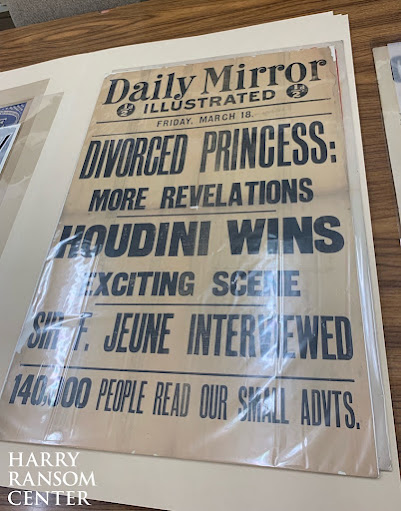 The earliest poster in the Ransom Center (as far as I recall) is this mega rarity advertising Harry and Bess in a "Spiritualistic Entertainment." This was printed in St. Joseph, Missouri, possibly in 1898, and is a treasure indeed. 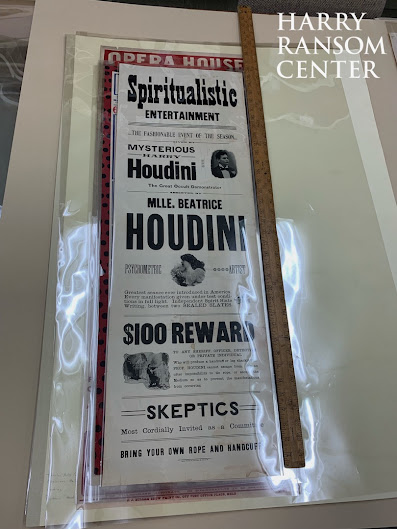 While the Ransom Center holds some familiar and famous posters, such as Houdini's Milk Can and Circus Busch Water Torture Cell, here's a poster you never see. I never even knew this was a full size (40 inch) poster until Eric laid it before me. This was made by Atelier J. Zier in Leipzig, likely in 1901 (the only time Houdini played that city). This one really grabbed me and I'm considering it for the frontispiece of my book. 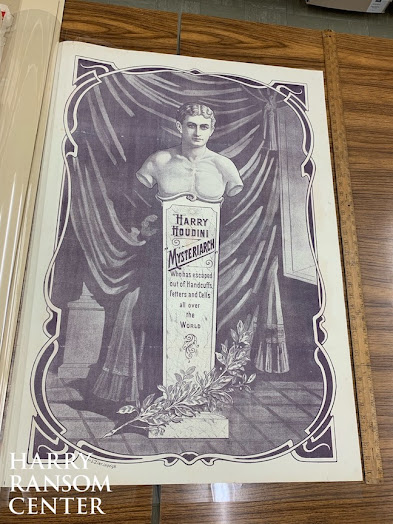 The Ransom Center also has a complete collection of posters from Houdini's The Man From Beyond. I've shared some of these elsewhere, but here's one that's too big to share or even see in full. This massive six-sheet would ship in sections and be pieced together on a billboard. Below is just a single panel. But what a panel! The colors and stone lithography are breathtaking. 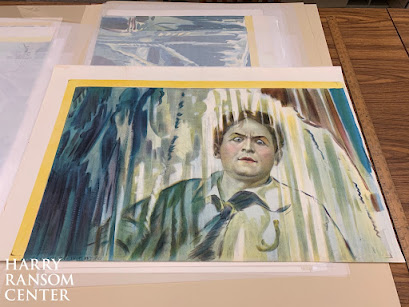 Below is a poster not found in The Man From Beyond pressbook. This was made by Hegeman Printing Co. of New York and may have been for the film's general release. (The white area is presumably where theater information would be printed or written.) It's more of a bread and butter one-sheet, but that's what makes it so special and rare. 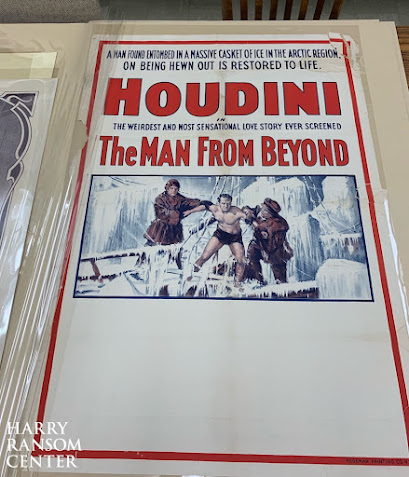 It was now time to get down to "work," and Eric made me an incredible offer. I could do my research in the Ransom Center's comfortable and well appointed Reading Room. Here you put in your requests for materials via the online Finding Aids and their crack staff retrieves them from the stacks for you. This is what it looks like. 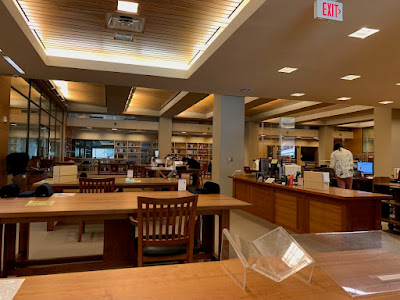 Or, if I didn't mind a less glamorous setting, I could work with him up in the stacks themselves. There I could pull down boxes of Houdiniana at will. Eric and I could also chase down leads on the spot and gab. No choice there. Stacks for me! You know, some people go to Hawaii for their vacation. This is me in paradise. 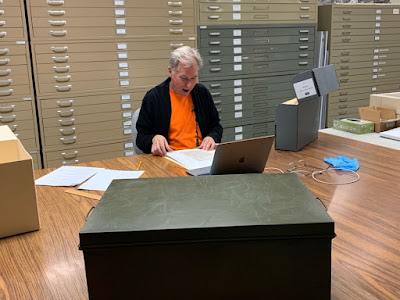 Now, I came to the Harry Ransom Center with the primary goal of building on my chronology and mining as many dates from the collection as I could find. Letters are gold in this regard, so my plan was to read through all their Houdini correspondence, even if that meant sacrificing things like photographs. But instead of starting at Container 1, I decided to plunge into Container 8, which I knew held a file of letters written by Houdini to Bess. 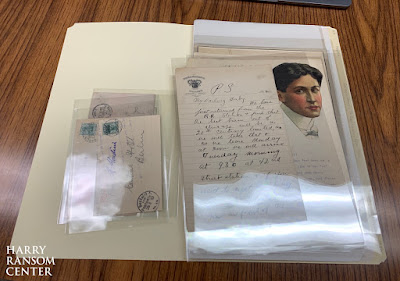 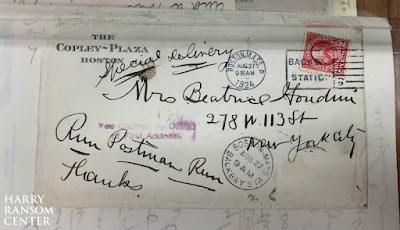 I couldn't have chosen a better way to start. This file could be the greatest treasure in the entire Harry Ransom Center. These letters are filled with warmth and wit, showing Houdini to be playful, loving and very human. The first two postcards so knocked me out that I must have spent 45 mins reading, re-reading, consulting my chronology, reading again, laughing, and then reading to Eric. And then came a 12-page handwritten stream of consciousness love letter from 1924. Incredible!
When I looked up from that one it was 5 PM. Closing time. Hours had passed and I had gotten through only three pieces of correspondence. Suddenly, six days (now five!) felt like a very short amount of time. And did I really have the discipline to limit myself to correspondence with so many other Houdini treasures all around me?
It was only the beginning.
Can't wait for more? Members of my Patreon can view 17 preview images from my next post: More Treasures of the Harry Ransom Center. Click the image below to go. 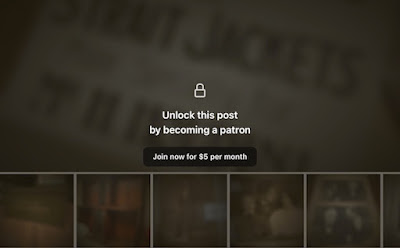