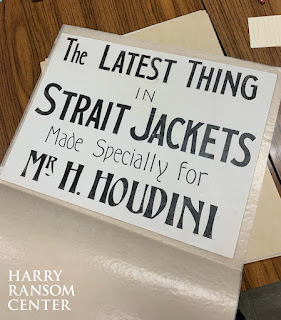 Last month I spent an incredible six days at the Harry Ransom Center at the University of Texas in Austin, which holds the largest public collection of Houdini research material in the world. I shared some of the incredible treasures I saw on my first day in this post. Today I'm back with more.
It's worth repeating that the Harry Ransom Center is open to the public, so "anyone with a photo ID and a sense of curiosity" can see the treasures I'm about to show. Their website has excellent finding aids for the Harry Houdini Papers, the Harry Houdini Collection, and the Magic Collection. And if you are considering selling or donating a Houdini collection or item where it will be well protected and forever available, the Harry Ransom Center should be at the top of your list. So let's get back there!
One of the best things about my visit was the remarkable VIP treatment I received from Eric Colleary, Cline Curator of Theatre & Performing Arts Collections, and my good friend. Eric allowed me to do my research in the stacks where I could pull down boxes of Houdiniana at will. He also had a nice surprise waiting for me there. He had unboxed and placed their famous Houdini Estate bank box on the table right in front of me where it remained the entire time. So this was my view in paradise. 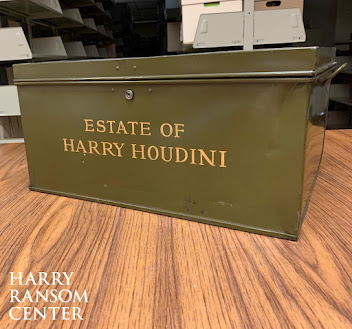 Each morning I also walked past a remarkable piece of furniture. This breakfront belonged to Houdini and stood in the parlor of 278. This actually played a key role in Messmore Kendall acquiring Houdini's collections from Bess in 1927 (as you can read here). The breakfront came to the HRC in 1958 along with the Kendall Collection. But it went on an odyssey adventure and even resided for a time in the Governor's Reception Room of the Texas State Capitol. In 2019 Eric discovered it in storage and brought it back to the Harry Ransom Center where it lives today. Good morning Houdini's breakfront! 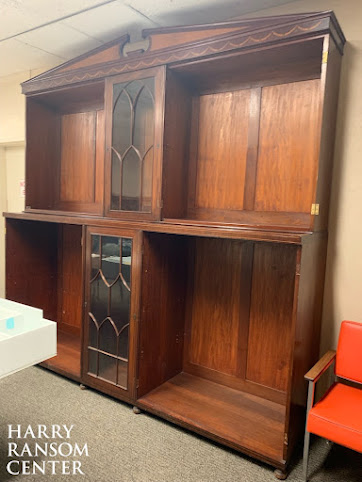 My primary goal was to read all the correspondence in the collection and mine dates and data for my upcoming chronology book. Yes, I was there to "work." But there was a lot of correspondence to read! Some files bewitched me more than others. First and foremost was a large file of letters written by Houdini to Bess. As I shared in part one, this was the file I started with and the letters are remarkable. It's also the file that contains the most letters written by Houdini himself. (As these are Houdini's own files, most of the Ransom Center correspondence are written to him.)
Here's another delightful letter from that precious file. A marvelous slice of 278 life: 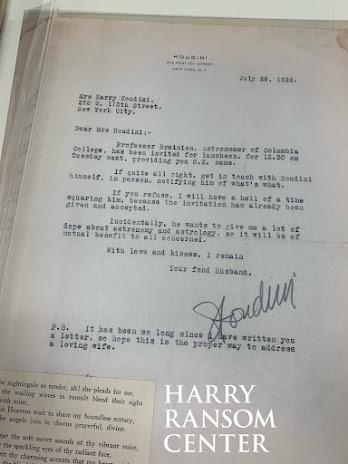 Another file of interest was a large collection of letters written by Montraville M. Wood, a Chicago inventor and associate of Thomas Edison who worked with Houdini on his Milk Can. The file is packed with letters related to improvements to the apparatus and the construction of new cans. Wood includes many illustrations. But there was one illustration at the end of a letter that tickled me as it must have tickled Houdini. 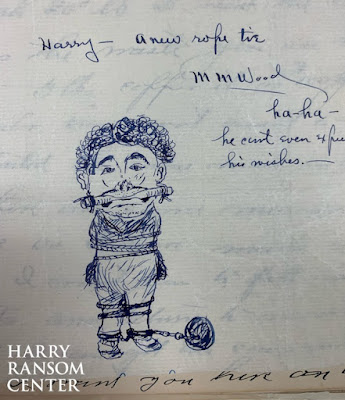 Another standout file contained correspondence from Birchet "Kit" Clarke, a famous press agent and Harry Kellar's former manager. I loved these letters! I don't know why Clarke isn't mentioned more in Houdini biographies as his letters are loaded with gold (including the mention of a Vanishing Elephant poster). They are also very, very funny. He uses a variety of nicknames for Houdini, his favorite being "Googley." There's even one letter that Clarke taped together as one giant scroll (below). Their friendship was a revelation to me. 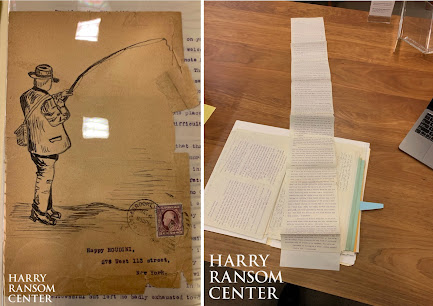 Occasionally Eric and I would fall down a side rabbit hole. While chatting about newspapers, Eric pointed out that the Ransom Center has the photo morgue archive of the New York Journal-American. He did a quick search and found there was a Houdini file in that collection. Had anyone ever looked at it? Eric asked if I wanted to take a break and head down to those stacks and see what might be there. Yes please! Once there, Eric pulled a thick file of press photos from a container. The photos were fantastic, but largely familiar. And then this happened! 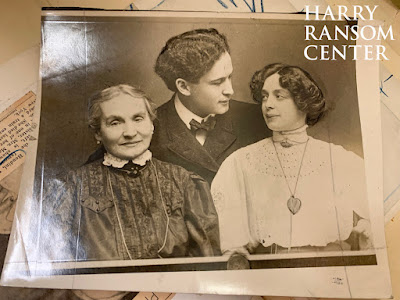 If you're like me, you just went weak in the knees. Yes, this is a third variation of the famous "my two sweethearts" photograph taken at the F. Gutekunst photo studio in Philadelphia in 1907. This is actually a photograph of a photograph, not an original, but still a great find. The Ransom Center has the originals of the other photos from this famous session, because of course they do!
Occasionally I'd come across something unexpected, such as the below. The Ransom Center allows researchers to insert notes into a file if they have some clarifying information. Slipped into the sleeve of the famous photo of Houdini and the Roosevelt grandchildren (as seen here) I found this exchange between my friends and mentors Manny Weltman and Patrick Culliton. Pretty funny. 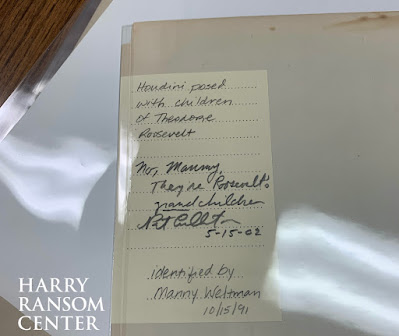 I actually added my own note identifying the photo's location and date (Feb. 20, 1925. Home of Mrs. H.A. Alexander, 167 East 74th St., NYC). So I love that Manny, Patrick and I all now share a sleeve in the Harry Ransom Center.
As the days ticked away, I found myself growing apprehensive. It was becoming clear I was not going to be able to read all the correspondence in the collection, and I knew there were other treasures that I would kick myself for not seeing. I began to formulate a new plan how to split my days between correspondence and big ticket items. But many times I just surrendered myself to anything that might be "cool." Eric, as always, was delighted to lay these treasures before me.
I mean, how could I not see this famous Ransom Center rarity? This is the only known copy of Houdini's very first pitchbook. Even Houdini considered this to be rare. It's actually much smaller than I imagined (7 inches), but what a piece of history. 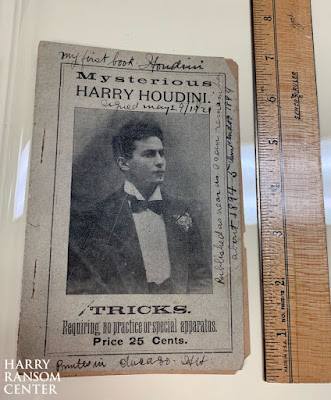 Anything from Houdini's 1903 Russian tour is a mega rarity. Here are two fantastic broadsides advertising his appearance at the Gordon "Aquarium" Garden in Moscow in July 1903. Can you believe the condition? 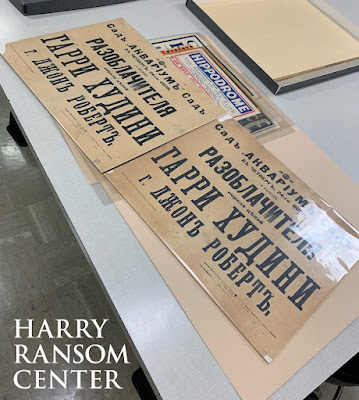 Here are two large format photos of Houdini and Samri Baldwin. I wonder why Houdini had these made? The Ransom Center also holds a fair amount of correspondence from the famed "White Mahatma." In one letter from 1919 Baldwin writes:

"I was much gratified at receiving your courteous letter; particularly because so many professionals who become rich and famous forget all their old friends. Your letter showed me that I was never wrong in my estimate of you in thinking that money and fame would never make you a bit different from the whole souled boy I knew in Halifax and Kansas years ago." 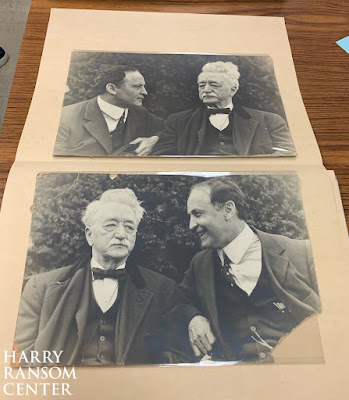 This is a large and meticulous scrapbook Houdini kept devoted to his movies. Half is filled with fan mail from all over the world, still in their original envelopes. (One love struck young fan from South Africa starts her letter: "Houdini, I hope you like long letters because I've lots to tell you.") The second half contains newspaper clippings devoted to The Man From Beyond. I was expecting it to continue with Haldane of the Secret Service, but it did not. In fact, Houdini seems to have abandoned this scrapbook along with his movie career. 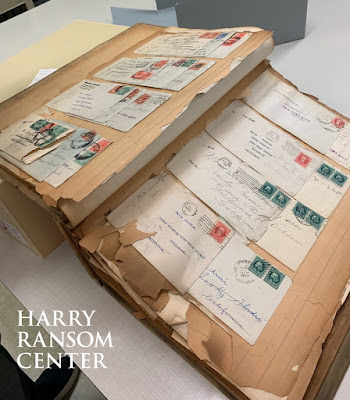 At the moment, the scrapbook is unavailable to view as it is much too brittle. The Ransom Center is working on a way to best preserve the contents. So this was a rare and exciting thing to see. Thank you Eric!
Speaking of movies, I nearly lost it when Eric brought these out. The Ransom Center has several original title cards from The Master Mystery (and one from The Grim Game). They are hand painted and works of art in their own right. These are the only surviving production artifacts from The Master Mystery, so pretty special! 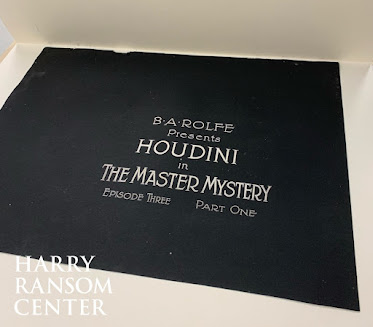 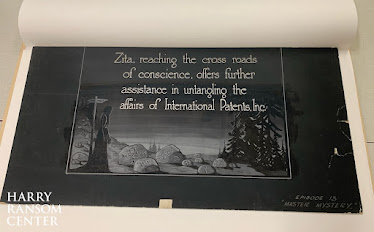 The Ransom Center has some mysteries as well. Below is a custom picture frame with the name "Harry Houdini" across the top. What special image did this frame once hold? I also got to see the famous Ransom Center seed (found among Houdini's papers). What kind of freak seed is this? 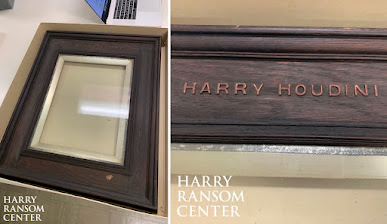 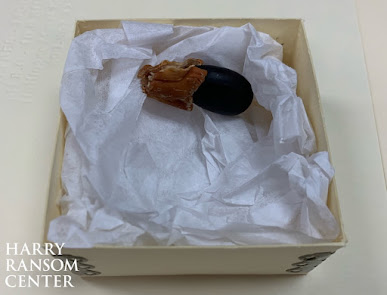 My final day was Saturday, August 13. I only had a half day to research as I had to catch a flight in the afternoon. As Eric was off, I spent that morning in the Ransom Center Reading Room, which I'm happy I got to experience as its very well appointed and the staff is very helpful. I spent these last hours photographing everything I still wanted to read, including files of letters written by Hardeen to his "Dear brother Ehrich", and the Chung Ling Soo file, which Eric emphasized as being a must. I even stumbled on a signed photo of Charmian London. The minx. 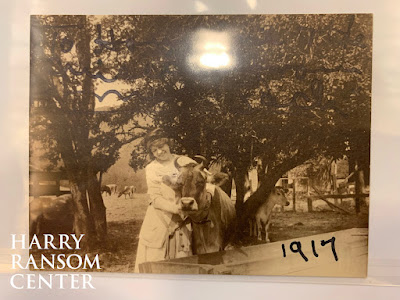 Believe it or not, as noon rolled around I sat back and realized I had nothing left to see. I had done it! I had, at the very least, laid eyes on everything I knew I wanted to see. In addition, Eric and I had taken an amazing tour of the Paramount Theater and I was able to enjoy Esther's Follies on the invitation of Ray Anderson, which is a must see when in Austin. So in six days I had accomplished my research goals and also achieved a life-long dream...
I had seen the treasures of the Harry Ransom Center!
When I landed back in Burbank that night, I entered the airport to be greeted by this. An omen? I don't know, but I felt like he might be saying, "You ain't seen nothing yet." 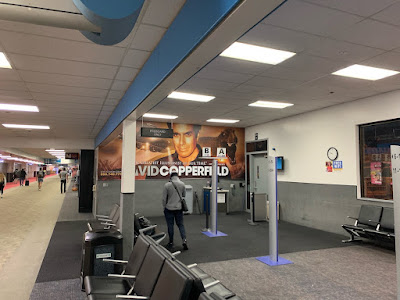 Thanks to Eric Colleary and all the wonderful staff of the Harry Ransom Center for giving me this incredible experience and allowing me to share these treasures here on WILD ABOUT HARRY.