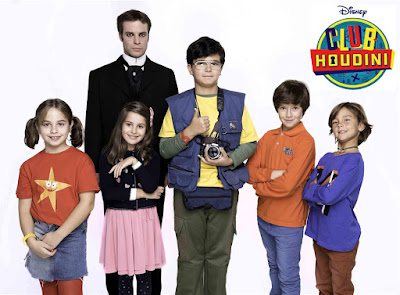 The Disney Channel in Spain has launched a new series called Club Houdini. The series features a group of kids in search of treasure with the help of Houdini himself, played by real-life Illusionist Iñaki Ruiz de Galarreta.

In an interview with elPeriódico, Galarreta said, "Houdini is one of my role models, even in my shows I make a tribute to one of the riskiest numbers, so to make this TV project has been very interesting for me. In the series, Houdini is a mysterious character, perhaps initially a little serious with children and closed, but as you go along, the character becomes more of a friend and mentor and gives them clues to find the treasure."

Club Houdini premiered October 28, 2017. The first two episodes, La Bola del Mundo and Aventura en el Museo can be found at the DC15 TV YouTube Channel. Below is a trailer.

This isn't Disney's first foray into the world of Houdini. In 1987 they produced Young Harry Houdini starring Wil Wheaton as a "Disney Sunday Movie."