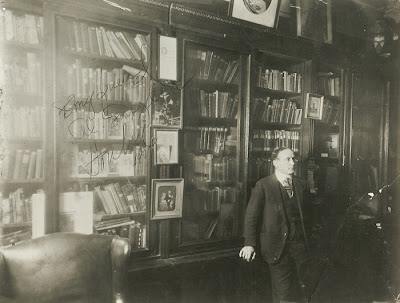 "When I have come to town the police have tried to show me that their shackles could hold me, and have failed; the booksellers have tried to sell me many books, and have succeeded." - Houdini


Our friend Lisa Cousins, librarian at the Magic Castle in Hollywood, has uncovered a fascinating profile of Houdini as collector in the January 1927 issue of The Bookman. The piece is called "Houdini's Literary Escape" by Prosper Buranelli, who interviewed Houdini in his home. It was published posthumously.

While Houdini was a well-known collector of books on magic, spiritualism and theatre, his collecting does not come in for much discussion or examination. That's why this article is especially interesting. It provides quotes from the man himself about his (surprising) initial motives for collecting, Bess's own book collection, and his plans for a project that he would not live to complete.

The article kicks off with a description of Houdini's home:

A three story house crammed with fifteen thousand books, fifty thousand prints, half a million cuttings and four tons of theatrical bills stands on an obscure New York block and domiciles a bibliophile–Houdini the Handcuff King. A dozen and a half rooms are lined with shelves and these with books, old, new, small, large. One is heaped with filing cases of prints. The basement is full of antique posters.


Buranelli describes Houdini as "a middle aged, middle sized man with a broad head and a good profile; small strait nose and long mobile upper lip. His talk is leisurely and whimsical, and characterizes a man of reading and meditation with a dash of the theatre." He then goes on to quote Houdini at length about how and when he started collecting books:

"I was a young magician," Houdini relates. "I took my magicship seriously. I saw myself one of the subtle necromancers of old times, full of mysteries, secrets, and secretiveness. I felt that the darkness and concealments of magic must be kept from the uninitiated, and grew earnest about it. I was young and visionary. 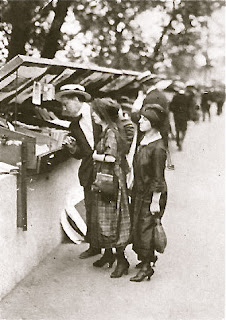 "On public stalls I saw books exposing magic, perhaps an old pamphlet detailing the secrets of great fire eater, or a treatise upon the use of mirrors in conjury. These books filled me with misgiving. I should have liked to suppress their editions. The editions were past my reach, but the books before me were not. I could buy them and cast them into the flames. I bought them, but did not cast them into the flames.

"My father had been one of the earliest rabbis in the middle west, a Talmudic scholar of note, and a writer of speculative disquisitions. He had reared me in the love of books. I felt the sin of destroying a book, and I kept the offending volumes I bought. But I burned their titles pages, lest some intruder should note where they had been printed and could be found, and gain the secrets they contained.

"I found myself with a growing library on magic, the bibliophile instinct I had inherited took full hold of me, and I collected systematically. Much of the writing about magicians lay in books about stage notables generally, and I was led to collect on the theatre."


Buranelli notes that Houdini's himself has published exposures -- including fire eating in Miracle Mongers and Their Methods. Houdini's defense is that "fire eating has gone out of vogue."

The article then turns, amusingly, to the question of spouses and the domestic problems that a book collecting habit can bring.

"Most bibliophiles," he declares, "are unable to work a reconciliation between books and marriage. Some give up marriage for books, other books for marriage, and still others nourish the discordant two in their bosoms. I know a professor who gathers books in spite of his wife, as many do, and who hides the volumes he had bought under the icebox until he finds a chance to get them into his room unnoticed.

"My wife is, herself, a bibliophile. She specializes in cook books. She has gathered approximately a thousand volumes treating upon the kitchen in many languages, some very quaint. I have to do on a little of my book buying surreptitiously." 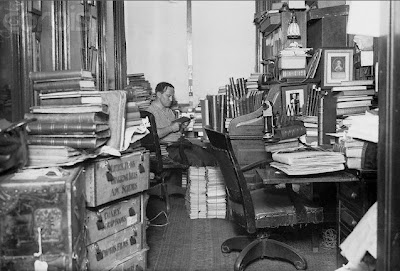 Houdini says he is currently reading Virgil ("I should like to dream of Virgil with a black lined stage and a set of mirrors"), and discusses the ancient art of conjuring. Even though Houdini's show program at this time specially states that he would not answer questions related to the miracles in the Bible (a spiritualistic trap), he does so here:

"But the greatest source of ancient magical lore is the Bible. When I want to beginnings of almost any of our devices I look into the Bible first. The theocrats of the Jews, like those of the Chaldeans, were wonderfully versed in conjuring.

"A superb trick seen in Aaron's staff that becomes a serpent. The Egyptian priests knew when pressure was exerted on the nerve centre at the base of the skull, and which was set squirming again by pressure on a nerve centre at the tail. Aaron, no doubt, learned the secret from the priests."


Houdini then introduces the reporter to Alfred Becks, his librarian, and reveals his plans for a future project (that would never be):

"He [Becks] is indexing the library for me," said Houdini. "I shall keep him with me, for no man living knows as much about the American theater as he does. He is a link with a splendid past.

"And when these tons of material are in order I shall begin a major work upon an enterprise that has kept my fancy for many years – a treatise upon literary plagiarism. In my reading I have caught numberless parallel passages, and have made notes on them. I shall compile them."

All this was very scholarly, but sorcery would out. Houdini began toying with his left thumb. He pulled the thumb off the hand. Then replaced it.


Thanks to Lisa Cousin's for sharing this wonderful find. The full Bookman article can be read by AMA members at the Magic Castle's William Larsen Sr. Memorial Library. 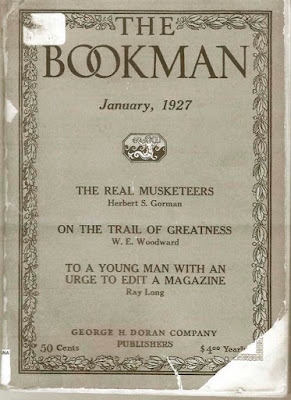