LINK: Harry Houdini and the Spirit Lover: A Tale With a Twist 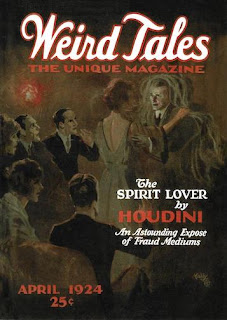 The blog Strange Company --"A walk on the weird side of history" -- has a nice summary of Houdini's short story, "The Hoax of the Spirit Lover", which appeared in the April 1924 issue of Weird Tales magazine.

Houdini's short stories, which began, as far as I know, with "A One-Night Engagement" in 1904, are one of the more curious aspects of his career. It's likely most were ghost written. At least we know H.P. Lovecraft ghosted his most famous short story, "Imprisoned with the Pharaohs". But the ideas still seem to have come from Houdini's mind, so these are still interesting.

Click the headline to have a read at Strange Company. The story itself can be read on the Internet Archive. In 1992 Pat Culliton published Houdini's Strange Tales which reprinted all of Houdini's (strange) fiction.