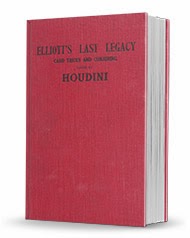 Today's "Houdini-palooza" offering from the Conjuring Arts Research Center is Houdini's 1923 book Elliott's Last Legacy. A FREE PDF is available for the next 24 hours from the CARC online store.

All this week CARC is offering a free Houdini book every day leading up Halloween. Each new title becomes available 1:26pm (EST) and is available for only 24 hours. Additionally, all Houdini items at the CARC store are marked down 50%.

Elliott's Last Legacy contains the work of champion card manipulator Dr. James William Elliott, who died before he completed this book. Elliott's collaborator, Clinton Burgess, turned to Houdini for assistance in finishing it and getting it published. Houdini enlisted the aid of Oscar Teale and published the book through his own "Adams Press Print." Houdini also penned the introduction.

Burgess later complained that Houdini had featured his name on the cover as editor while relegating his own name to a small "complied by" credit inside. (I own an inscribed copy in which Burgess has written below his name, "author and compiler".) The dispute grew so heated that Houdini eventually had Burgess removed from the S.A.M. for "conduct unbecoming a member." But if Burgess wanted Elliott's work to have a legacy, then Houdini's name certainly did the trick.

Head on over to the Conjuring Arts Research Center and download your free PDF of Elliott's Last Legacy. 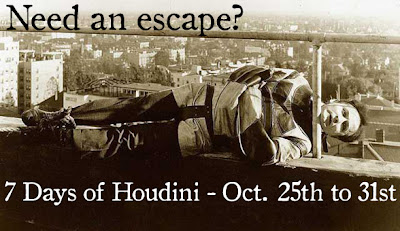