One of the more curious and unknown aspects of Houdini's career is that he published several works of short fiction. The first of these stories, "Bahl Yahn the Strong Man," appeared in the May 26, 1907 edition of the New York Sunday World. It was then syndicated in newspapers across the country. Below is the story transcribed in full from the June 2, 1907 St. Louis Post Dispatch along with the original illustrations. Enjoy. 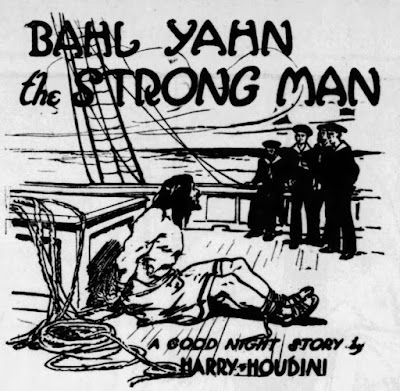 This is the story of Bahl Yahn who was a giant such as you see each year at the circus. More than that, he was a strong man, which many giants are not. And, last of all, he was swarthy, deep-eyed and mysterious looking — just the sort of fellow that all boys and girls like to see at the circus.

Many, many years before Bahl Yahn came to America, a band of Hindoo musicians was giving shows upon the streets of a seaport town in the East Indies where there were many soldiers of good Queen Victoria. With the musicians was a young girl who smilingly held out her hand for coins. She was so light and slim that one of the officers in gay uniform, a strapping fellow, whose strength was the envy of all the other soldiers, picked her up, tossed her high in the air and caught her as she came down. The girl thought this was great fun to go flying through the air, and it is hard to say who was more pleased with the applesauce of the crowd, the girl or the big officer, whose strength all admired.

But perhaps they played too long at this dangerous game, for the last time he failed to reach far enough out to catch the flying figure, and when the girl woke up from what seemed to her like a long and troubled sleep she learned that never again would she walk. But she was as brave as she was pretty, and by and by the young officer, who I promised her people that she should never want for good care, found that he loved her for her bravery and patience, and so they were married.

To their home came little Yahn – little only for a short time. He soon outgrew his pretty mother’s arms and promised to be as big and strong as his father. And his father would say to him, when the two bathed and road and exercised together: “You must grow strong and tall and always take care of your mother if anything happens to me.” And then Bahl Yahn would stand very straight and salute his father. When the latter was killed in a battle the boy was willing and able to care for his tiny, crippled mother.

They had no money, so he went away from the city to where he could till a farm. This lay on a bay in which ships often anchored, and Bahl Yahn’s mother loved to go with him into the field and watch the ships come and go. So Bahl Yahn made for her a cunning little seat of rushes which hooked over his shoulders, and there she sat like a queen on his back while he worked, for he was strong enough to carry her and work, too. 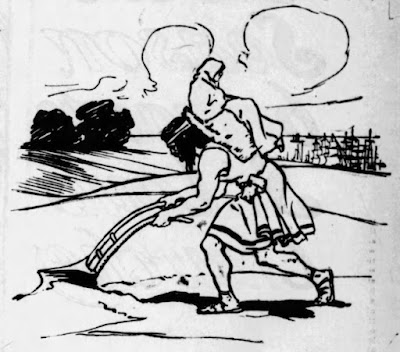 Thus it was that some red-faced men found him one day. They had come ashore for fresh water and, seeing how strong he was, they offered Bahl Yahn much money to carry the barrels of water on board the vessel. He could not carry both his mother in the barrels on his back, so he sat her carefully under a tree when he made trips to and from the vessel. It was hard work, and the captain of the boat, who could speak a bit of Hindoo language, kept telling Bahl Yahn what a wonderful man he was, which pleased the young Hindoo mightily. Also after each trip the captain would give Bahl Yahn a sweetish, spicy drink that tasted very good, but which finally made the young man feel rather strange. Never before had his knees felt so shaky, his hands so uncertain, and on the last trip he had to sit down to rest on the ship’s deck. And that was the last Bahl Yahn knew until he woke up far out to sea, with the stars shining over his head and ropes tied around his wrist and ankles.

My! How Bahl Yahn did try to fight! And after the wicked sailors were tired of watching his struggles they gave him more of the spicy drink and again he fell asleep. When he woke they put him to work doing the heaviest labor about the ship, and Bahl Yahn worked, for he found that when he did not work he was lashed and when he did work he received the sweetish drink that made him stop worrying about his poor mother sitting alone under the tree.

Thus was Bahl Yahn brought to America and delivered to the manager of a circus. He received new, fine clothes, plenty to eat, and, above all, as much of the liquor, for which he had formed a habit, as he asked for. Gradually he forgot the little mother under the tree and his promise to his father to care for her always. There is no telling whether the little mother would ever see him again if Ned Green and his grandmother had not gone to the circus. Ned was big for his age and straight and his grandmother was little in bent and white-haired, and Ned was as careful of her as if she had been a piece of thin, fine china. They stopped a long time before the platform in the side show where Bahl Yahn, the Hindoo giant, sat, and Ned told his grandmother what wonderful things he would buy and do for her if only he were as big and strong as Bahl Yahn.

Bahl Yahn listen to the boy’s chatter, and something stirred in his heart and there came to his dull eyes a light that had not been there since he had begun to drink so much of the spicy liquor. Neither that night nor the next day did he sleep and on the third day there came to the circus an old Hindoo who lived in the city’s foreign quarter, and Bahl Yahn leaned forward and grasped the old man's hand and they became friends. After that Bahl Yahn drank no more liquor, but every day he practiced the exercises his father had taught him, and the circus people were very much pleased and had his picture taken doing the exercises, and more and more boys and girls came to see him. No longer he sulked in his chair. He smiled and was always busy.

Then came a night when Bahl Yahn could not be found, and the next day the papers told of the wonderful contest of strength in which the Hindoo giant had wrestled with a strong man at a dime museum for a purse of $500, and how when the victory was won he had slipped away with an aged Hindoo and the $500, to be seen no more. But what the papers did not know was that Bahl Yahn was far out on the Atlantic Ocean while yet the circus people did not know that he had run away.

It was many weeks before Bahl Yahn reached a little farm overlooking the bay. There was his mother in the care of neighbors, desolate, older and white of hair, but still praying for him to come back. The next day he returned to work in the fields, with his mother on his back. When they sat down to eat their frugal lunch she cried a little and said: "Oh my son, it is good to feel your strong back beneath me, your strong arms around me.” 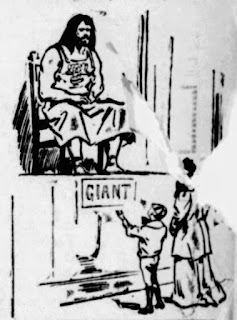 And Bahl Yahn held her tiny hand in his big, powerful fingers, and, looking far across the blue water, murmured:

"Yes, little mother, it is good to have a strong back and a strong arm, but there are other kinds of strength that a man or a woman needs more – it is to refuse that which tastes good to the tongue but eats out the heart and makes one forget duty and promises.”

But the little mother, who had never heard of the spicy drink which had stolen her son from her, just smiled and stroked his hand happily.


Unlike his later ghostwritten stories (one by H.P. Lovecraft no less), I believe Houdini really did write "Bahl Yahn the Strong Man". His psychology, values, fears, and predilections are just all over this tale. It's really a snapshot of his interior world -- his sense of duty to his father, his guilt over leaving his mother for extended periods, his love of physical fitness and hard work, and his disapproval of alcohol for men and women (a veiled message for Bess who may have developed her taste for the "sweetish drink" by now?). And the mysterious "old Hindoo who lived in the city’s foreign quarter" appears to be a substitute father figure, the likes of which Houdini would seek approval from his whole life.

One puzzle remains the identity of "Ned Green" who is mentioned by name when no-one else in the story is given a name besides Yahn. It's almost as though this "good-night story" is intended for young Ned.

Once when asked what his greatest ambition was, Houdini answered: "To live a life and die being worthy of the mother who bore me." Words that could have come from mighty Bahl Yahn himself. 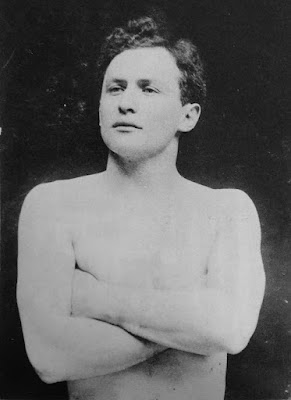 According to Patrick Culliton, who collected Houdini's fiction in his book Houdini's Strange Tales (1992), "Bahl Yahn the Strong Man" was first uncovered by Manny Weltman.