Here's a sweet Easter treat. This is Houdini's 1907 short story Dan Cupid–Magician. Unlike the perviously shared Bahl Yahn the Strong Man and Yar, The Primeval Man, I don't believe Houdini wrote this story himself. The prose is far too polished. But Houdini's romantic sensibilities and predictions are still all over this tale, so it's likely this was a collaboration. (I harbor a fantasy that it was actually written by Bess who, based on her letters, was a fine writer.) The story is copyrighted "C. H. Sutcliffe" who ran the McClure Newspaper Syndicate.

The below is transcribed from the November 1, 1907 Baltimore Sun, which, as far as I can find, is the first appearance of Dan Cupid–Magician. Enjoy! 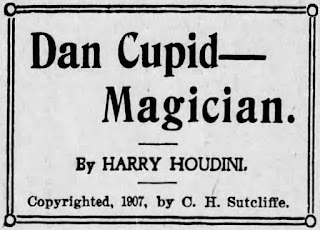 In agony of apprehension, Williams started to arrange his modest conjuring apparatus. A few hours earlier his debut as a parlor entertainer has been a matter of joyous and ambitious anticipation. Now, the brocaded walls of Senator Morgan's music room fairly threatened to close in and choke him, while the fragrance of hothouse flowers oppressed him strangely. He wondered how he had ever dared to ask the vaudeville agent who supplied Mrs. Morgan and other fashionable hostesses with talent to let him substitute for Thorley, the eminent magician, who had fallen victim to la grippe. Of course he would fail, Mrs. Morgan would be furious, the agent would never give him another engagement, and his career would come to ignominious end. The laughter and chatter of the children dancing on the other side of the folding doors, sounded like the death knell of his long-cherished hopes.
"Can I help you in anyway? I am Miss Morgan. The servants are all busy with supper––and I thought––perhaps"––
Young Williams had never thought of needing help, but he faced the clear-eyed, flower-like girl, and the echo of her well-modulated voice rang in his ears, he felt that his one hope of succeeding lay in her presence. Men and women, wiser in the social world than Frank Williams, had fallen under the spell of Helen Morgan's rare sympathy and charm, and wondered how this girl of high ideals and gentle manners could be the daughter of Senator Morgan, ponderous with the arrogance of newly acquired wealth, and Mrs. Morgan, who radiated commonplace attributes as her recently purchased diamonds scintillated light.
At Frank's faltering thanks, Helen Morgan began quietly but deftly to carry out his instructions, placing a light gilt table here, a tabouret there and, where it would be within easy reach of conjurer's hand, a candle or a gleaming revolver. And though afterwards Frank Williams cannot tell how it happened, before the settings for his act were prepared the girl had drawn out his tail of half-tragic struggle, the prosaic, hard-headed father storming over the visionary, inexplicable nature of his youngest son, the loyal mother secretly brooding over and abetting this odd chick of her little flock, his constant endeavor to learn the secrets of magic and then to secure a hearing, even the rented dress suit, and the gold watch which had been pawned that very afternoon to buy bonbons and gilded trinkets to distribute among his youthful audience. As he finished, it seemed to Helen Morgan that she stood in the presence of a struggling genius. She had read such stories of poets, musicians and inventors. The tardiness of the conjuring world faded, and tenderly her hand rested on the white satin cover of the young man's servante. It was a bit of his mother's wedding dress, sacrifice gladly to her son's art, a rich fabric yellowed with age and finished with stripes of rare old lace.
The performance was a great success. The children were duly mystified and more than delighted with the showers of trinkets and bonbons, which apparently came from an inexhaustible source. Mrs. Morgan had condescended to express her appreciation, a footman had served a supper of such rare delicacies that Frank had long to pack them all up with his paraphernalia and take them to his mother, and now as he walked down the broad avenue leading from the house he felt as if the house behind him was fairyland, indeed, and Helen Morgan its princess.
But he was roused from his dream by a grimfaced butler, who came hurrying after him.
"You're to come back to the house," was the brusque order, and, re-entering his fairyland, Williams faced Senator Morgan, a glowering figure, in the foreground, and Mrs. Morgan, a hysterical one, in the background. But in the eyes of the third he read pity, some tender pity which he had seen in her eyes when Helen Morgan had stooped to pick up his trick rabbit as the frightened animal, escaping from his pocket and trembling at the shouts of the children, had run to the girl for protection.
"It's jail for you, young man, unless you produce my wife's rings. She left them behind the rock-crystal vase in the music room, and we don't propose to have them disappeared as you do handkerchiefs and rabbits."
The scene which followed was a horrible nightmare to the young magician––his own protestations of innocence drowned in Mrs. Morgan's hysterics. Senator Morgan's orders for an officer, Helen's pleading for time to search, and finally the discovery of the rings, by a maid, in Mrs. Morgan's dressing room. And when it was all over Williams was thrust out in the night through the side entrance, feeling more like a thief than an acquitted man. Then suddenly a gentle hand fell upon his arm and a gentle voice murmur in his ear:
"Just a minute, please. I want to tell you how sorry I am. I hoped this would be the greatest night of your life"––
For one long minute the young man who had his own way to make and the girl who's future had been assured, so far is wealth could accomplish it, looked into each other's eyes. And the soul of the man, suddenly born, went out to the divine tenderness of innate womanliness which is a greater power than mere physical beauty. He spoke quietly, but with new-found confidence.
"It has been a wonderful, wonderful night to me––and some day I am coming back to tell you why."

Under the chaperonage of a dowager duchess who knew how to turn her title to financial account, Helen Morgan was "doing" the London season. In a Mayfair drawing room she sat, and beside her was a man with a monocle, an English accent above reproach and a patronizing air. Of course the Morgan millions would mean the remantling of his ancestral of crumbling castles, but, then, the utter indifference of this girl irritated him even while it commanded his admiration.
"I suppose you saw Erskine in Paris? He's been the "go" over there––made by the American set, I understand. They say it's his manner as much as his art that got the women all going. He never speaks during his performance and he has the most inscrutable eyes. Never could understand why women went in so heavily for eyes. Conjurers bore me as a rule, but I'm curious to see this man."
Helen Morgan hardly heard what the man with the monocle was saying.
"Erskine!"
In a secret drawer of her jewel case there lay a card, "Frank Erskine Williams," the card of the man who had never come back, never sent her a message in five years––the man who had forgotten! But, no, this could not be, for the man who had promised had a ready tongue; yes, a ready tongue, as all man had––who promised.
A flutter of fans and a murmur of subdued interest announced that the lion of the evening had arrived. A quick inclination of the head, a snapping of long slender fingers, and the performance was underway. With lightning-like rapidity and wonderful deftness the conjurer worked, and the breathless audience watched, not so much the tricks as the unsmiling lips, the inscrutable eyes which seemed not to see either the sea of faces upraised to his nor even the assistant who did his unspoken bidding.
Only one person in the fashionable audience saw something more, and that a quivering, blue-eyed girl who, for one brief second, had met and held the magician's glance and seen burning in those inscrutable eyes a fire which had burned there on a night five years before––a fire lit centuries agone in the eyes of the worlds first man––Adam.
The assistant called for a ring with which is master would work a new trick. Mechanically Helen Morgan handed him a magnificent hoop of pearls. Erskine took the ring gravely, raised a silver hammer and apparently smashed the trinket into a thousand pieces on an anvil of curiously wrought silver. Then he produced a sealed casket of water, in which swam a gold fish, and in the mouth of the fish he found the hoop of pearls. But the ring was not returned to its owner by the assistant. Instead, as the room rang with applause, the magician himself walked quietly down the aisle formed by the parting of many silken skirts and placed the ring on the girl's trembling white hand. Not even the man with a monocle noticed that the conjurer for an instant held the slim fingers in his with a pressure that threaten to crush them, nor did he dream that within the girl's palm lay another ring which she dared not look.
Somewhat awkwardly she slipped on her long white glove. She was so deeply engaged in this operation that she did not even see the conjurer as he left the improvised stage. In the privacy of the boudoir, hours later, she held the conjurer's ring under the light of a blazing electrolier.
"Such an odd––I was almost going to say––ugly ring," she murmured as she slipped it on her finger and turned it this way and that. A diamond, an emerald, and amethyst, a ruby, another emerald, a sapphire and a topaz formed the brilliant half hoop. Then suddenly her cheeks burned crimson. She had read the story of the many-color gems. Their first letters spelled "dearest," the message of the man who had not forgotten his promises.
With her chocolate the next morning came an oddly shaped French-gray envelope, bare of crest or monogram.
"Forgive my temerity of last night," ran the message within, "but for years I have been carrying that ring in my pocket, waiting for our meeting. They were the first gems I bought when success came my way and I gathered them one by one, each perfect in its way and worthy the one woman in all the world. Yet last night I heard you were to marry the Earl of Warburton. If this is true do what you will with the ring. If it is but an idle rumor drop me a single word to the Hotel Cecil––'Come.'"
Erskine laid aside the morning papers, heralding him as the fashionable world's new-found idol, to answer a summons to the phone. The voice at the other end of the wire faltered, then grew firm and strong––"Come; I could not wait to write."